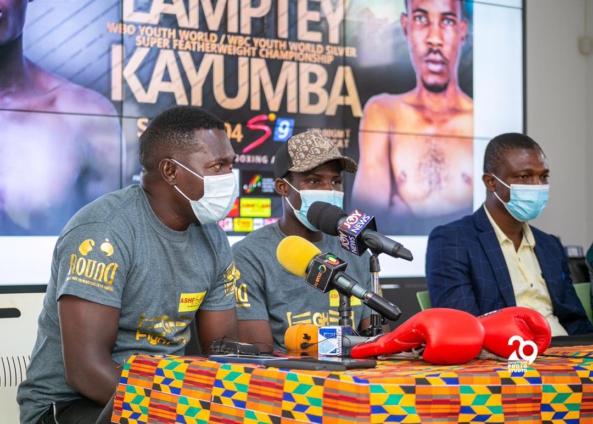 Ghanaian featherweight boxer Alfred Lamptey has promised to stop his Tanzanian opponent Iddi Kayumba when the two face off for the WBC Youth Silver and the WBO Youth championship on September 4, at the Bukom Boxing Arena in Accra.

The “Bukom Bomber” promised to “deliver for Ghanaians the two belts” while speaking at a press conference, organized by the event sponsors at the MultiChoice Ghana limited headquarters in Abelenkpe, Accra.

The 19-year-old boxer is currently undefeated with 8 wins, 6 of them via knockouts, while his 23-year-old Tanzanian opponent’s record stands at 12 win(s) 3 losses and 2 draw(s).

Lamptey also added that he was glad about what he has been able to achieve so far and encouraged boxing fans to show up to the event early because “they may end up missing the action since he plans to knock out his opponents in the early stages of the match.”

He reiterated his commitment to the course of becoming a boxing world Champion while also promising to raise his country’s flag high on the world stage.

WBO African President Mr. Samir Captan warned Lamptey against underestimating his opponent and urged him to “be careful while in the ring and not to listen to anyone else apart from his corner.”

The former president of the Ghana Boxing Authority (GBA) and celebrated promoter also talked about the importance of enforcing discipline among Ghanaian boxers and their managers in order to capture world titles for Ghana, a traditional boxing powerhouse.

Lamptey’s trainer Eben Adjei aka “Killer” also thanked the promoters, sponsors and organizers of the event for their support while assuring the public that “he had prepared Alfred well and they were going to keep the belt here in Ghana.”

Managing Director Multichoice Ghana Alex Okyere was also optimistic about the growth of the sport in the country saying, “I think what excites me is the fact that we are able to support to grow a sport and get more champions coming from Ghana.”

According to the CEO of Box Office Promotions Alex Ntimoah, VVIP tickets for the event will go for 200 cedis, 100 cedis for VIP and 30 cedis for general admission