We will fish out police killers - IGP - MyJoyOnline.com

We will fish out police killers – IGP 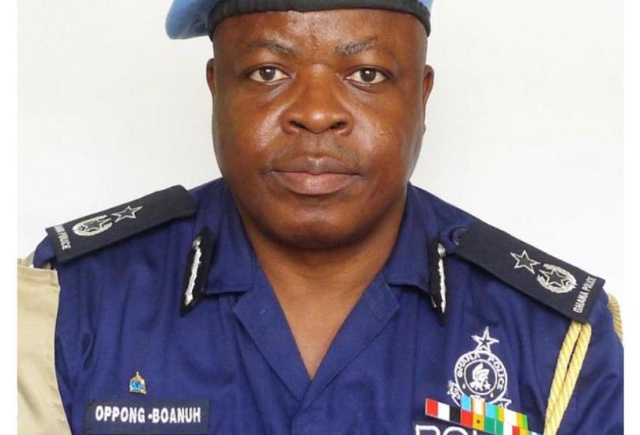 The Acting Inspector-General of Police, has urged members of the force not to be deterred by recent fatal attacks on officers.

James Oppong-Boanuh said officers should be spurred on to discharge their duties of keeping the communities safe, notwithstanding the activities of the assailants.

Describing the assailants as cowards, the police chief said the force is well equipped “to fish them out.”

His comments at the mid-year church service for police personnel follow the killing of three officers in three weeks.

On Tuesday, L/Cpl. Alhassan Asare was found lifeless in a plastic chair while on guard duty at the Dukes Petroleum Filling station at Swedru in the Eastern region at about 5:40 am.

His rifle was in between his thighs having sustained severe gunshot wounds on the head. The uniform was soaked with blood.

Three empty shells were found on the ground, the report said.

That was after an officer was killed in Manso Nkwanta in the Ashanti region.

A policewoman, General Corporal Agatha Nana Nabin, was on July 30 killed while on snap check duties at Kumbungu in the Northern region.

She was shot at the back of the head with the bullet passing through the mouth and killing her instantly, media reports say.

The acting IGP says the criminals will be apprehended in due time.

“Let us make sure we have periodic medical checkups; it is very important”

He added that a  team from the police hospital will soon team hit the fields so officers deployed on duty will have access to some medical services they will ordinarily not have access to.