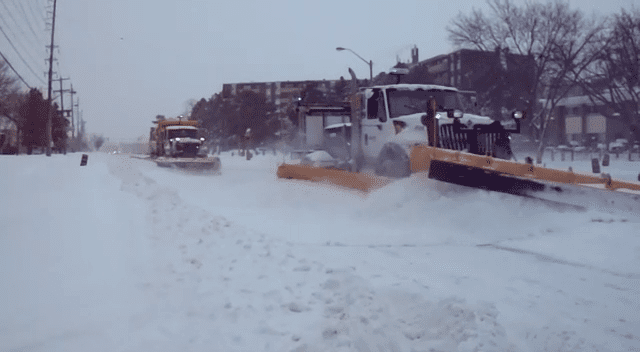 A blizzard has hit the province of Ontario in Canada which made thousands of residents cancelled work on January 17, 2022.

The severe snowstorm with high winds and low visibility also made some boards to close schools and cancel bus services because of dangerous traveling conditions heavy snow on the streets posed.

The Environment Canada four days ago warned that a heavy blizzard was likely to hit the Province of Ontario that would dump not less than 30 centimeters of snow that would severely affect businesses.

Early hours of January 17, 2022, the blizzard in fact hit the province that shut down schools, colleges, universities and businesses such as grocery stores for the day.

The heavy snow which blanketed the cities of Toronto, Hamilton, Brampton Berry, Scarborough and Mississauga caused temporary closure the popular Gardner highway while Covid-19 vaccine clinics were also shut down because of the bad weather.

Most of the small stores in the shopping malls also shut down because of the bad weather.

Toronto Police Service disclosed that the heavy snowfall created dangerous traveling conditions on the streets which resulted in dozens of collisions on the major highways in the city of Toronto.

Before noon, the situation was really bad as some cars were spotted stacked at some major intersections, snowplows finding it difficult to clear the roads as in some instances their heavy trucks got stacked.

Toronto Transit Commission [TTC] public transport buses were not regular as a result of the bad traveling experienced by heavy snow on the streets.

Emergency Ambulances, Fire Services engines could be heard with their sirens rushing to either get to accident scenes and rescue lives, apartment buildings to attend to patients, or provide security at places where cars got stacked.

The environment Canada’s blizzard warning has ended but that of the snowstorm is still in effect because of bad traveling conditions the roads might pose as a result of heavy snowflakes that need to be cleared from the streets.

Residents have been advised to better stay at home and avoid non-essential travel.