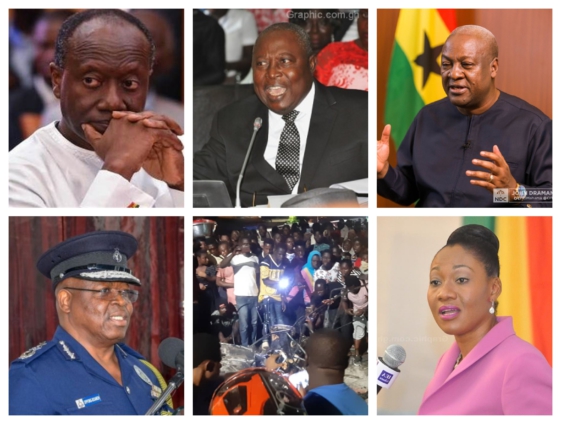 Residents at Anloga Junction in Kumasi are blaming the police for the accident which claimed 3 lives recently.

The three people were burnt to death after the tricycle they were traveling in collided with a trailer.

According to eyewitnesses, the tricycle, locally called Pragya was crossing the airport intersection road, when the trailer driver lost control of his brakes.

Mr James Opong-Boanuh, however, had a stern warning for those who want to foment trouble.

Some minority MPs have been claiming there is insecurity in ghana but when he appeared in parliament this week, The national security minister said the claims are untrue and even blamed some MPs for causing the insecurity.

But the minority leader insisted on the earlier claim.

Parliamentarians invited the Electoral Commission (EC) to brief the House on its preparedness towards the general elections but no one turned up.

Well, the minority side reiterated the importance of the EC’s chair to brief the house. They wanted her cited for contempt.

Commissioner Jean Mensah, however, showed up on Saturday and outlines details of their plans or the upcoming polls.

The Special Prosecutor Martin Amidu released its report on the Corruption Risk Assessment conducted into the Agyapa Royalties deal. This followed with a blistering attack  on him by both the NDC and NPP

Mr. Mahama described Mr Amidu as a ‘coward’ for his act.

DISCLAIMER: The Views, Comments, Opinions, Contributions and Statements made by Readers and Contributors on this platform do not necessarily represent the views or policy of Multimedia Group Limited.
Tags:
Agyapa Minerals Royalties Limited
Anloga Junction
Election Hotspots
Weekly wrap