When we said we will review policies, they said we’ll cancel them – Naana Opoku-Agyemang 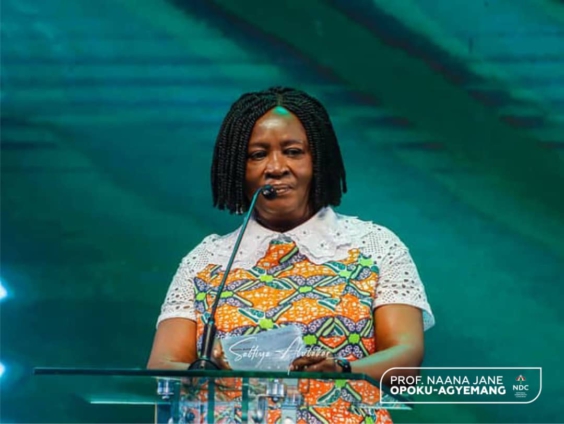 The 2020 running mate of former President John Mahama, Prof Naana Jane Opoku-Agyemang, says that she is waiting with bated breath for the definition of ‘review’ as would be applied to government’s flagship programmes.

She said it will be good to know how government would review the Free Senior High School programme.

Professor Naana Jane Opoku-Agyemang, however, could not comprehend why the same people who alleged that former President John Mahama meant ‘cancel’ when he used the word ‘review’ want to do what they once criticised.

“When we said ‘review’ others said we were going to cancel. Today, we are waiting for the definition of review from the ‘Black Dictionary’ since that is the source that they use for many things,” she said at the launch of TEIN App on Monday.

Prior to the 2020 election, President Akufo-Addo said Ghanaians should not allow the opposition National Democratic Congress (NDC) to review its flagship Free Senior High School (SHS) programme when it comes into office.

The President said Mr Mahama’s return could mean the cancellation of the programme.

However, the NDC flagbearer had said at a meeting with the Ghana National Council for Private Schools (GNACOPS) that he will review the Free-SHS policy within his first 90-days in office if elected in the upcoming 2020 general elections.

The NDC flagbearer cited inadequate consultation with stakeholders in exploring the most effective ways to implement the programme.

JoyNews/AdomNews · When we said we will review policies, they said we’ll cancel it – Naana Agyemang

Free SHS is Back on the radar

The issue has again come up for discussion as the government recently announced a review of its flagship programmes.

The Free SHS programme was a major campaign promise by then-candidate Nana Akufo-Addo in 2016, which has subsequently become an essential part of the educational system.

A year after its implementation, the Finance Minister, Ken Ofori-Atta said the policy should have targeted persons with genuine need and not made to benefit everyone.

One of the leading campaigners for change in government in 2016, the Minister said people in his economic bracket should not be enjoying such a policy.

“True, it may be that there have to be changes in the way we are administering it. I can’t take my child to Achimota or Odorgono and leave him or her there and drive away and not pay for anything whiles I can pay for ten people,” he said.

Following the current economic crisis the Information Minister, Kojo Oppong-Nkrumah revealed that all 16 flagship programmes of government will soon be reviewed to ensure their objectives are well achieved.

Ghana’s economical numbers have not been at their best in recent times.

The cedi is depreciating in relation to the dominant currencies at a fast pace. Similarly, there has been a hike in fuel prices with a litre of diesel selling at GH¢10.

In view of this, President Akufo-Addo chaired a crunch cabinet meeting last weekend to find solutions to the raging economic challenges.

DISCLAIMER: The Views, Comments, Opinions, Contributions and Statements made by Readers and Contributors on this platform do not necessarily represent the views or policy of Multimedia Group Limited.
Tags:
Prof Naana Jane Opoku-Agyemang
Review policies
TEIN App