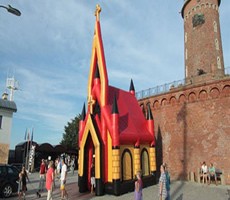 We must note that the Passion Week of the Savior, started on 11th Nisan, 30 AD and ended on 17th Nisan, 30 AD, both dates counted inclusively. And so, between 11th and 17th Nisan, there were three Sabbath Days.

Therefore, since the body of the Savior was laid in the tomb on 14th Nisan, 30 AD, until the Sunday-discovery of the empty tomb, the only non-Sabbath Day, in which anyone could do any work, was 16th Nisan, 30 AD.

So, why could the women not visit the tomb on this working day of 16th Nisan, 30 AD? The fact is that, this was the only day available to them, in which they could go shopping for the much-needed spices, and have the permission of the Law to labor in preparing them, in readiness for the embalmment of the Lord’s body.

The spices were indeed procured and prepared on the 16th Nisan, 30 AD, but not early enough, for the women to get to the tomb to do the job of embalming the Lord’s body, which they were just too eager to do.

Note that, we are talking about the year 30 AD, where there were no machines to aid in the performance of chores. By the time the spices were ready to be used to embalm the Lord’s body they had run into the darkness of the next evening; the start of another day, the last day of the week Sabbath Day of 17th Nisan, 30 AD.

These women were virtually sitting on tenterhooks, as they had no choice, but to await the coming of day light, by which they could work on the body of the Savior, lying in a dark tomb.

And so, with the light rays of the early morning sunrise of 18th Nisan, 30 AD, these women could no longer wait. They quickly dashed out of their homes, in a marathon race to the tomb, only to meet it empty.

Their disappointments, written all over their faces, as they met a tomb without the body of the Savior, is clearly painted in the bible narratives for all lovers of God’s salvation in Christ to see. So, let us not talk more of this.

From this treatise so far, aided by and indeed clearly portrayed in the tabular presentation of facts we see the correct days and dates of the Passion Week.

From all of these, we see that Jesus’ entry into Jerusalem, from the village of Bethany, took place on Saturday, 10th Nisan, 30 AD, and not on a Sunday (11th Nisan, 30 AD?). Sadly, Christianity’s Palm Sunday dogma and revelry, is founded on the error that the Savior entered Jerusalem from Bethany on Sunday.

If the Lamb of God, entered Jerusalem from Bethany on Sunday, and was subsequently killed on the Friday following this entry, as is touted by Christianity’s clergymen, then he overstayed by two days, his Visa of Four Days within which it was mandated by God, for him to be quarantined in Jerusalem, in readiness for his slaughter outside the walls of the city.

The so-called Palm Sundry triumphal entry by the Savior into Jerusalem and his Friday crucifixion, being taught by the Clergy, is obviously without the consistency, perfection and highest precision that characterize all Works of God.

It would seem the Wisdom of God was not involved, in the execution of His own plan of redemption for mankind, if He did not ensure that the Passover Lamb was slaughtered outside the walls of Jerusalem, the fourth day after he had been quarantined within the city.

How could any person dare think God acted sloppily, against his integrity, wisdom, and might, in keeping the Passover Lamb, for two extra days beyond the four, fixed by His authority? Only an inglorious Clergy of the Second Century could have.

Was the Savior crucified on Friday, as Christianity’s big wigs have been preaching, for close to two millennia? No! If it were so, then the three days and three nights needed for the Savior to be in-and-out of the tomb, to unambiguously establish his Messiah-ship, would take us from a Friday-crucifixion to a Monday-resurrection; and not even their wrong Sunday-resurrection (Ishtar?).

If, from Christianity’s Friday-crucifixion theory, we look for the fulfillment of the sign of Jonah, this important fulfillment would have occurred on Monday, 19th Nisan, 30 AD.

In that case, Mary Magdalene’s visit to the tomb on the previous day (Sunday), would have given her the opportunity to embalm the Lord’s body, since the body would still have been lying in there.

Despite all this, let us feign acceptance of the Clergy’s view of a Friday-crucifixion. On this basis, let us also accept the most plausible time of burial of the Savior’s body to be within the first hour or less, into the Saturday following on the heels of this supposed Friday crucifixion-day.

A count of three days and three nights from this early Saturday hour of burial would take us to an early Tuesday hour as the resurrection time of the Savior. And this Tuesday would be a far deviation from even the Sunday-resurrection that has for a long time, been forced upon simple-minded salvation-seekers by the Clergy.

The obvious facts, events and dates of the Passion Week of the Savior can be summarized as follows: The Savior entered Jerusalem from Bethany, an event wrongly christened as Palm Sunday by clergymen, on Saturday 10th Nisan, 30 AD, and not on Sunday; he was crucified on Tuesday 13th Nisan, 30 AD and not on Friday; was laid to rest in the sunset hour in which Wednesday, 14th Nisan, 30 AD, the Passover day, begun; and resurrected on Saturday, 17th Nisan, 30 AD.

In the light of all these facts and scenarios, why the obvious Friday-crucifixion-Sunday-resurrection misinformation put out by Christianity? The answer is not hard to find. It has a very long history, traceable to the time Rome was the world’s political super-power.

You see, in an over zealous and hurried bid to distort the facts of the resurrection of the Savior, and thereby render it spiritually valueless to salvation-seekers, the Clergy of the Second Century, under Rome, committed a lot of blunders in the execution of this diabolical plan of theirs.

Clergymen of that inglorious past, who were aided by the political clout, direct support, and connivance of pagan-Rome, managed to contaminate most of the pure and holy tenets of the Christian Faith, bequeathed to the world by Jesus Christ through his apostles.

Indeed, all of Christianity’s dogmas of Ash Wednesday, Palm Sunday, Maundy Thursday, Good Friday (crucifixion day?), Easter-Sunday (resurrection day?), Christmas, etc., are manifestations of these blunders committed by an ignorant man-made Clergy, who worked with and for pagan sun-god worshipping politicians of the erstwhile Roman Empire.

None of the above feast-days of Christianity has the authorization of the scriptures. They are in fact, “holidays” determined and fixed to replace the holy days of God, by and at the whims and caprices of men who had no true knowledge of the scriptures.

Men, who neither learnt discipleship in the school of Jesus Christ, nor, had any grasp of the tenets of the Christian Faith that were championed and defended by the apostles of Jesus Christ, at great cost to their lives.

It must be noted that, all feast days of God are indeed annual memorials of important landmarks of Israel’s history. And so these memorials must fall on fixed dates of the Hebrew calendar. These dates never change.

This is because God the Almighty has declared these days holy, and they must remain forever so. God, who does not change, also has all His holy days fixed and unchangeable. (—concluding part to this article is in Part Six).

Chris Bapuohyele is a bible-expositor and author of the book: BEWARE OF THIS FALSE DOCTRINE… His email address is: chrisbapuohyele@yahoo.com