A man in Kenya has told the BBC he decided to dig a road by hand through thick bush to nearby shops to spare the suffering of his fellow villagers.

Using a hoe, spade and axe, Nicholas Muchami has so far cleared 1.5km (one mile) in six days - and has a short way to go to complete the road.

It is on land officially earmarked for it, but attempts to get local leaders to build it have failed, he says.

He has been praised as a local hero for his efforts for Kaganda village.

Residents of the village in Muranga County, which is 80km north of the capital, Nairobi, had been using a longer 4km route to get to the shopping centre.

The BBC's Peter Mwai in Kenya says villagers had been upset because a shortcut to the shops, via a footpath passing through private land, had recently been fenced off. 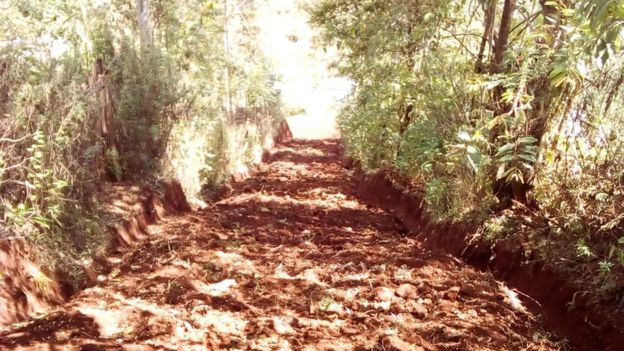 The road is just wide enough for vehicles to drive along.

"I have a lot of energy in me. I decided to volunteer," he told the BBC.

He said he had worked from 07:00 to 17:00 local time last Monday to Saturday as he wanted to complete the road before the onset of the rains.

People were incredulous that Mr Muchami, who usually earns his living doing odd jobs during the day and as a guard at night, had volunteered for the job.

"When I was working on the road, people would ask me, 'Are you being paid'?" he said. 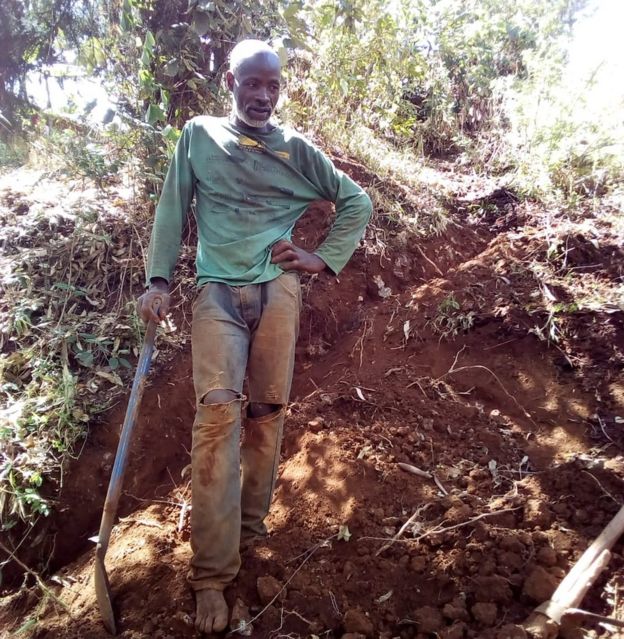 Mr Muchami has been working for eight hours a day

Even though half a kilometre of the road still needs to be finished, locals, including pupils attending the nearby primary and secondary schools, have been using the section he has cleared.

"Now it has made people happy, and I am happy too. My work has helped people of all kinds," the 45-year-old said.

He plans to continue digging the remaining part, even though other villagers have refused to help him because no-one is willing to work without pay, he said.

His story was first highlighted on Facebook by Kinyungu Micheke, who praised Mr Muchami's persistence after the dismissive response of the local government when he had asked them for help.