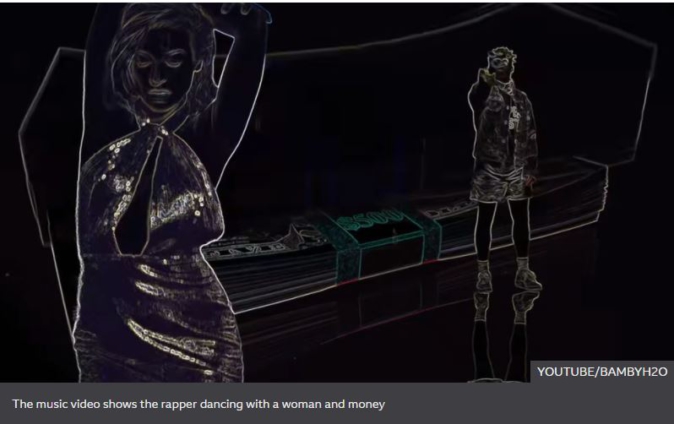 An advert for a single by rapper Bamby H2O which featured illegal drug use was “irresponsible” and must not appear again, the Advertising Standards Authority has said.

The video, posted on YouTube, used expletives “likely to seriously offend” and was “gratuitous and objectified women”, the ASA said.

According to YouTube, it removed the ad before the ASA ruling.

Bamby H2O did not respond to the ASA or the BBC.

In a statement, YouTube told the BBC: “YouTube ads should be safe and relevant, and we have strict policies against inappropriate, adult and dangerous content that we enforce vigorously.

“We also have a tool where anyone can report these ads, and these complaints are reviewed by our team.

“In 2020, we removed 3.1 billion bad ads from our platforms and we continue to be strongly committed to a safe and healthy ad ecosystem.”

The full-length music video remains on its channel but now carries a warning saying it “may be inappropriate for some users”.

In its judgement, the ASA described the ad as “a full-length rap music video” which appeared before an unrelated music playlist on YouTube.

“It featured a number of scenes depicting the consumption of illegal drugs, including a bottle of amphetamine tablets and a powder consumed through a rolled-up bank note,” the ASA judgement noted.

It concluded: “We considered that the ad, which featured illegal drugs and drug-use was irresponsible for depicting the use of drugs in this context.

“The ad also featured the outline of a woman exposing her breasts which we considered was gratuitous and objectified women.”

It also said Bamby H2O must ensure any future ads “did not cause serious or widespread offence”.