Trump to congresswoman of colour: Leave the US

Rashida Tlaib (centre), who responded by calling Trump "a lawless and complete failure of a president", with Alexandria Ocasio-Cortez (left) and Ayanna Pressley (right)

US President Donald Trump has been accused of racism after posting tweets attacking Democratic congresswomen.

He claimed the women "originally came from countries whose governments are a complete and total catastrophe", before suggesting they "go back".

He then said Speaker Nancy Pelosi "would be very happy to quickly work out free travel arrangements".

It comes a week after Ms Pelosi clashed with "the squad", a group of four left-wing Democratic women of colour.

Of the four congresswomen, three - Alexandria Ocasio-Cortez, Rashida Tlaib and Ayanna Pressley - were born and raised in the US, while the fourth, Ilhan Omar, moved to the US as a child.

Ms Ocasio-Cortez was born in the Bronx in New York, approximately 12 miles away from the Queens hospital where Mr Trump himself was born.

In a three-tweet thread, Mr Trump accused the congresswomen of "viciously" criticising him and the US.

He wrote: "So interesting to see 'progressive' Democrat congresswomen, who originally came from countries whose governments are a complete and total catastrophe, the worst, most corrupt and inept anywhere in the world (if they even have a functioning government at all), now loudly and viciously telling the people of the United States, the greatest and most powerful nation on earth, how our government is to be run.

"Why don't they go back and help fix the totally broken and crime-infested places from which they came. Then come back and show us how it is done.

"These places need your help badly, you can't leave fast enough. I'm sure that Nancy Pelosi would be very happy to quickly work out free travel arrangements!" 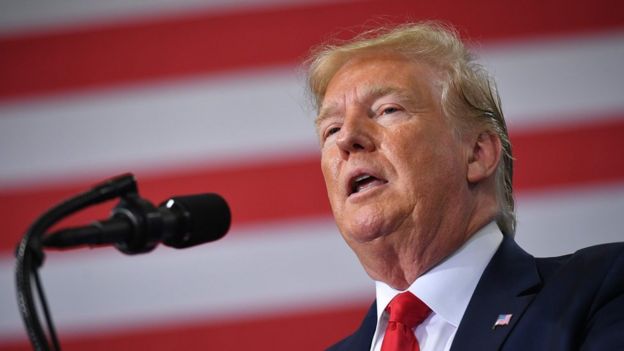 Image caption: President Trump has been accused of racism and white nationalism

He did not explicitly name the congresswomen he was talking about.

However, from the reference to Ms Pelosi it has widely been assumed he was referring to Ms Ocasio-Cortez, Ms Tlaib, Ms Pressley and Ms Omar.

Over the past week, Ms Pelosi has clashed with Ms Ocasio-Cortez, who accused her of singling out women of colour for criticism following a disagreement between Democrats over a border security bill.

What has the response been?

Ms Pelosi, Speaker of the House, quoted Mr Trump's tweets and described them as "xenophobic".

"When @realDonaldTrump tells four American congresswomen to go back to their countries, he reaffirms his plan to 'Make America Great Again' has always been about making America white again," she said.

"Our diversity is our strength and our unity is our power," she added.

Ms Ocasio-Cortez tweeted at Mr Trump: "On top of not accepting an America that elected us, you cannot accept that we don't fear you either."

Ms Omar told the president that he was "stoking white nationalism because you are angry that people like us are serving in Congress and fighting against your hate-filled agenda".

She also called him "the worst, most corrupt and inept president we have ever seen".

Democrats running for the presidential nomination also condemned Mr Trump. Senator Elizabeth Warren said the "vile comment" was a "racist and xenophobic attack". Beto O'Rourke said : "This is racist. These congresswomen are every bit as American as you."

"Even if it were just about Rep. Omar, it would still be racist. We don't tell people we've welcomed into this country to 'go back'," she said.

A host of other commentators also flooded the social network with criticism.

White House reporter Brian J Karem tweeted at the president: "Good morning, racist much?" while US political commentator Josh Rogin said: "This is a new, terrible, racist, sad low, even for Trump."

Mr Trump has since tweeted again, standing by his original comments and further criticising "people who speak so badly of our country".