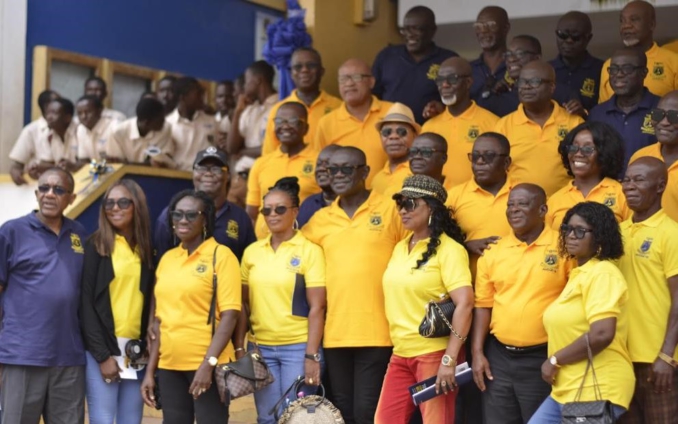 The 1972 old boys of Opoku Ware School have handed over a fully-refurbished auditorium to their alma mater.

The ¢500,000 facility is a major project spearheaded by the group in celebration of its Golden Jubilee anniversary after exiting the school.

Known as the Burgess Hall, the auditorium was named after the first headmaster of the school, Reverend Father Francis Burgess, for his tremendous contributions to the spiritual and social upbringing of the students.

The auditorium would serve as an additional mass gathering facility for academic and religious activities by students and the management of the school.

Project Coordinator, Katakyie George Dapaah, described it as an honour the opportunity to give back to their alma mater, especially renovating a facility that was built in honour of a phenomenal figure of the school.

He believes the refurbished auditorium would shine more light on the reputation of the first headmaster of the school.

“This building is of great significance to us. When we came to school 50 years ago. It served as the dining hall, and for entertainment purposes. But after some years, the building wasn’t living up to its name and reputation as an assembly hall.

“So, we felt it was a focal point. We feel proud the Headmaster led the way for us. So this is in a way to enhance his name and something that befits the status of the first headmaster of the school,” he said.

“This is the block we can gather. The rest of our assembly halls are under renovation. Because we are so many when we gather, some of the students sit outside the auditorium. We no longer have to go take the PA system in and out of the hall.

“It’s going to help us with teaching and learning and I hope this will help with the academic outcomes of the school,” he said.

He called on the government and other year groups to expedite the completion of stalled projects at the school, including a larger assembly and a teachers’ bungalow.

He also indicated building more housing facilities for teachers would attract more teachers to the school and facilitate teaching and learning for academic excellence.

“We want the ones that we have to be completed. Most of the blocks we have in the school are not completed. The government should come and complete it for us.

“They should also wall the school. The northern part which shares a border with St. Hubert is not walled. It has to be done so it can provide security for the students,” he said.

DISCLAIMER: The Views, Comments, Opinions, Contributions and Statements made by Readers and Contributors on this platform do not necessarily represent the views or policy of Multimedia Group Limited.
Tags:
1972 year group
Opoku Ware School