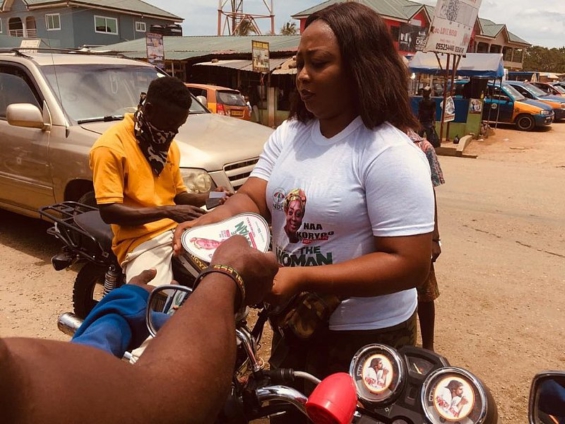 Two persons are reported to be injured in an accident involving the convoy of the parliamentary candidate of the National Democratic Congress (NDC) for the Awutu Senya East constituency.

Phyllis Koryoo Okunor is said to have been on her way home when a car approached hers at top speed.

The accident which happened in Kasoa is believed to have been a deliberate attempt to assassinate the Parliamentary candidate.

Madam Okunor, who was driving alone, said she spotted the suspects from her side mirrors and quickly veered off her lane when the car approached hers.

After the suspects missed her, they rammed into her team members on a motorbike, injuring all two in the process.

Madam Okunor, at an emergency press conference, alleged that the suspected assassins were her opponents.

The matter, she said, has been reported to the police and the victims currently receiving treatment at the hospital.

Reacting to the reports, New Patriotic Party’s parliamentary candidate, Hawa Koomson, admitted she was holding a campaign, but denied ever being behind the assassination attempt.

She quizzed why she had only received such accusations from Madam Otukonor and none from the other male contestants in the constituency.

The Municipal Chief Executive for Awutu Senya East, Michael Yaw Essuman Mensah, however, assured that the Municipality was on top of issues and would deal with individuals who try to foment trouble.

DISCLAIMER: The Views, Comments, Opinions, Contributions and Statements made by Readers and Contributors on this platform do not necessarily represent the views or policy of Multimedia Group Limited.
Tags:
Awutu Senya East
NDC parliamentary candidate