2 suspects arrested with weapons at Banda Nkwanta, 2 others on the run 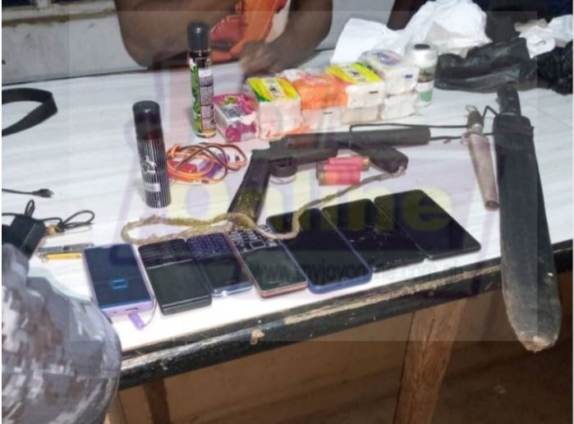 Police at Banda Nkwanta in the Bole District of the Savannah Region, have arrested and detained two suspects, one of them is a female, while two others, both males, are on the run.

According to the Police, the two suspects, Issah Bari, 34, and Amina Osman, 25, were spotted by area community volunteers in an unlawful gathering in front of a local guesthouse (Good Boss Guest House) in Banda Nkwanta Community between 9 and 10 pm on Sunday, May 29th, 2022.

They are alleged to have been planning to commit a crime, adding that they were arrested and handed over to the Police.

The two are being held in Police custody assisting with investigations while their accomplices who are on the run are being sought after.

A source at the Police Station tells JoyNews that a thorough search was conducted on the suspects and the following items were retrieved from them; a locally manufactured pistol, a dog chain, a long cutlass, three live cartridges and a knife.

The rest are;  two packets of gold seal cigarettes, two caps, three smartphones, five key pad mobile phones, one light jacket, two shirts and an unspecified amount of money among others in their two separate bags.

According to the source, “all the four suspects are of Fulani extractions.”

He added that, “I think it’s even long overdue for the National Executives or Chiefs to call them to order or for the Police to streamline their activities in the communities they live because there is no way we can conduct a swoop due to the scattered nature of the environment here.”

Meanwhile, this arrest brings the number of crime related arrests in the Savannah Region to five.

On Sunday, three persons were arrested in connection with the murder of the late Lawyer Richard Badombia who was shot and killed on the Bole-Bamboi highway.

DISCLAIMER: The Views, Comments, Opinions, Contributions and Statements made by Readers and Contributors on this platform do not necessarily represent the views or policy of Multimedia Group Limited.
Tags:
Banda Nkwanta
weapons