2014 offers hope for the youth of Ghana – Ludwig 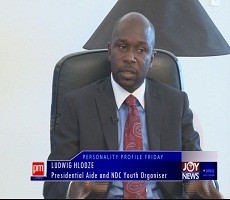 The National Youth organiser of the ruling National Democratic Congress, Ludwig Akpene Hlodze, says the new year, 2014, will bring a lot of structural and institutional reforms to the youth front of the party and Ghana as a whole.

In a statement on January 1, 2014, the Youth Organiser pledged the unwavering support of the youth of the party to the administration of President John Dramani Mahama.

“The year 2013 was quite challenging to both party and government with the youth being the hardest hit. We are hopeful that the reforms and measures instituted by the President to tackle the challenges in the past year, the pressures will ease in order to make way for sustainable projects to offer jobs and improved living standards for our people especially the youth of Ghana,” Ludwig stated.

He assured the youth of the NDC and the country as a whole that they should take advantage of the establishment of the Youth entrepreneurship fund and put in such proposals that will enable them access the fund to set up their own businesses. He also asked for a close relationship between industry and academia to allow lot of training opportunities for young students on vacations so that by the time they complete their respective programmes they would have acquired some real life experiences to support their training.

Ludwig also advised the youth to support the party Leadership in its quest to bring structural and administrative reforms to the party in conformity to best practices across the globe. He called on the youth to take active part in the upcoming Party biometric registration of its members and encourage as many party sympathisers, supporters and well wishers to be duly registered as members of the Party.

He hinted that new reforms aimed at strengthening the structures of the youth wing from the branch levels to the national level will be considered and thoroughly discussed moving forward to endorsement at congress.

The youth organiser appealed to all young appointees in Government to continue to exhibit high standard of commitment and dedication to work so as to justify their appointment and open doors for more young people to be given opportunities to serve in similar capacities.

Ludwig Hlodze, admonished the youth of the party to remain focused and committed in supporting the party and use laid down party processes and institutions to seek redress on any matter of concern.