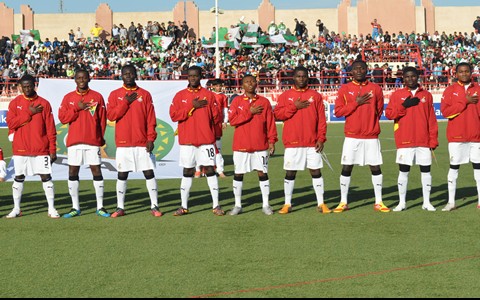 In Group B,  the Satellites  of Ghana hosts South Africa in the opening match on 9 March 2015 and Mali versus Zambia, both at the Caroline Faye Stadium. Three days later at the same venue, South Africa will engage and Mali whilst Zambia battles Congo.

COSAFA duo, South Africa and Zambia have been drawn together for the Orange Africa U-20 Championship Senegal 2015 that runs 8-22 March.

On 14 March 2014, it will be Senegal versus Congo at the Leopold Senghor Stadium and Nigeria against Cote d’Ivoire at the Caroline Faye Stadium in Mbour, located along the coast of the West African country.

The only two teams from Southern Africa were housed together in Group B alongside Ghana and Mali during the draw of the championship held on Sunday, 21 December 2014 in Cairo, Egypt.

CAF General Secretary, Hicham El Amrani conducted the draw and was assisted by CAF Executive Committee member, Amadou Diakite, who doubles as President of the Organising Committee of the African U-20 Championship.

Hosts Senegal, Nigeria, Congo and Cote d’Ivoire are drawn in Group A.

The opening game of the 19th edition of the biennial championship will see hosts Senegal squaring Nigeria at the Leopold Senghor Stadium in Dakar on 8 March 2015 before Congo welcomes Cote d’Ivoire later in the other game of the first day.

The semi-finalists will represent the continent at the 2015 FIFA U-20 World Cup in New Zealand.