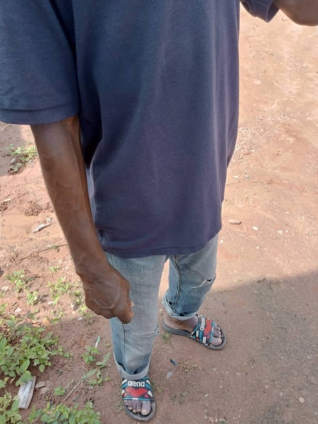 He had no choice but to beg for a plate when he saw his class representative and others carrying packs of food.

“I was standing in the workshop when I noticed some ladies serving the food,” said Salam (not his real name).

“I was ashamed, but hunger can drive anyone to do anything”.

Salam had not eaten the day before and had to go for lectures on an empty stomach. He had not gone to bed without supper for the first time; he had done it on numerous occasions.

On this day, September 23, 2022, the Institution of Engineers and Technology (IET) Ghana was inaugurating and inducting new engineers at the Akenten Appiah-Menka University of Skills Training and Entrepreneurial Development (AAMUSTED) in Kumasi.

Executives of the Institution had to convene at the mechanical workshop of the university to have lunch.

Salaam approached one of the waitresses about 20 minutes before lunch to request a plate.

“I want to eat some of the food since I’m hungry,” Salam said.

Everyone was taken aback. Salam, on the other hand, seemed unfazed and added, “I’d appreciate some food, please.”

One of the engineers pleaded with the waitress to serve him food. Salam was served a plate.

When I looked Salam in the eyes from where I was seated, I could see he was hungry. He appeared dehydrated, with a fragile face. I gave him my drink so he could relax and gallop.

After a while, I approached him and inquired, “How are you?”

I wondered where Salam was from. “I am from Tafo,” he said.

Salam, does not look to be enjoying his time at university. He is attempting, thus he must succeed.

When he took our stuff to the parking lot as we were about to leave the theater, I saw that he had no support from anyone.

He struggled to save my number on his small phone, wrapped in a rubber band with the keypads in poor condition.

Salam claims he often ‘journey’ on foot from Tanoso, where the university is located, to Tafo, a distance of about 12.6km. When he has enough money, he walks from Tafo to Sofoline and picks a “trotro” mini-bus to school.

On Saturday, September 24, 2022, I sought to know more about Salam again, just to be sure he wasn’t an imposter on campus.

I spoke with a student and lecturer at AAMUSTED to corroborate Salam’s situation. I was too sure the students would know his struggle.

Salam’s struggle to make it in life is heartbreaking, according to Ing. Felix Zator Tembile of the Department of Mechanical and Automotive Technology Education.

“I saw him sometime back during their end-of-semester examinations, and he was looking for his colleagues because they had a paper to write that day,” Ing. Tembile told me.

According to him, Salam was unaware of the lecture hall where the aforementioned paper was to be written.

“When I urged him to contact his colleagues and find out what was going on, he stated he didn’t have a phone,” said the lecturer.

The call went through around 1:30 PM, and we agreed to meet at Moshie Zongo School Park in Kumasi in about 10 minutes.

Salam wasn’t far from the location, so he arrived minutes before I did. I was delighted to see you again.

I inquired why his phone had been turned off for the entire half-day. Salam’s itel phone, which can only make calls, has a charging system problem. As a result, he must always put the battery on another phone before charging it.

Every time Salam does this, his phone will be switched off until he puts the battery back into the phone.

Salam and I met for three reasons: to learn about his family, secondary schooling, and how he is doing at AAMUSTED.

He lost his father when he was in primary school in the early 1990s. He has no recollection of what happened to his father because he was too young at the time.

Life has not been easy since, which is one of the reasons Salam chose the Kumasi National Vocational Training Institute (NVTI), where he studied auto-mechanics and graduated in 2006.

He had to enroll for the pre-HND mechanical engineering program at Kumasi Technical University because he was not qualified to enter university or any of the tertiary institutions due to a lack of some core subjects.

His mother is still alive, but things have not been going well for her porridge business. She had challenges that prevented her from financially supporting Salam during his polytechnic education. Salam never had a comfortable living situation at the polytechnic, though some support came from people – he doesn’t want to mention names.

Between 2008 and 2013, the 32-year-old attended Kumasi Technical University and graduated from an HND program.

The only time he made a fortune was during his national service. Salam claimed he had never held, felt, or spent more than 200 cedis in his entire life until that period.

Salam’s inability to find work after completing his national service, as well as the never-ending struggle to support his family, caused him to think ceaselessly.

“If I didn’t have a job that can provide for my family, I couldn’t also let my days pass by unproductively,” he added, prompting him to seek advice from someone who suggested he pursued a degree.

Salam applied for Bsc Mechanical Engineering at AAMUSTED in 2017 and gained admission, but was unable to pay the fees. All efforts and engagement with people to assist with payment yielded no results. He had no choice except to forego the idea of furthering his education.

2018 came and went, and he was unable to attend university owing to the same financial difficulties. Salam had to try his luck again when 2019 arrived.

This time, too, he gained admission, but he had to go from one person to the next to get help. He was determined and hoping that things would be different this time.

Lo and behold, a Good Samaritan in the Kumasi suburb of Manhyia, whom Salam declined to name, paid the admission fees and has continued to do so.

But there are more obstacles than Salam could have imagined. When university resumed this semester, Salam skipped two weeks of lectures, and his colleagues assumed he had dropped out.

He indicated that being an engineering student at university is challenging, especially in his case, because he lacks the necessary equipment to effectively pursue the programme.

For instance, he does not have a laptop computer to conduct research as required by engineering students. The only computer he has ever used was the one provided by the previous government. Salam applied and received one that did not last long.

“Laptop isn’t a priority right now because I can’t even afford to buy books and make photocopies or relevant documents,” says the student.

He does not have an Android phone, nor does he own an Android phone to communicate with his fellow students, especially given that official communication is done through WhatsApp. He is equally unaware of any information discussed among students on campus.

“Sometimes, I’d walk to school and realize lectures had been cancelled,” he complained, adding that he would have known if he had an Android phone and could have monitored the information on their WhatsApp group.

His predicament caused his colleagues at the University to contribute about 180 cedis to cover his fare to and from school.

There are many students at AAMUSTED who live the hard way.

“As you can see, there is a lot we can tell you. Just yesterday, I had to remove the attire I came to campus with and give it to a student so he could attend a university event,” said Ing. Tembile.

DISCLAIMER: The Views, Comments, Opinions, Contributions and Statements made by Readers and Contributors on this platform do not necessarily represent the views or policy of Multimedia Group Limited.
Tags:
Akenten Appiah-Menka University of Skills Training and Entrepreneurial Development (AAMUSTED)
Mechanical Engineering student