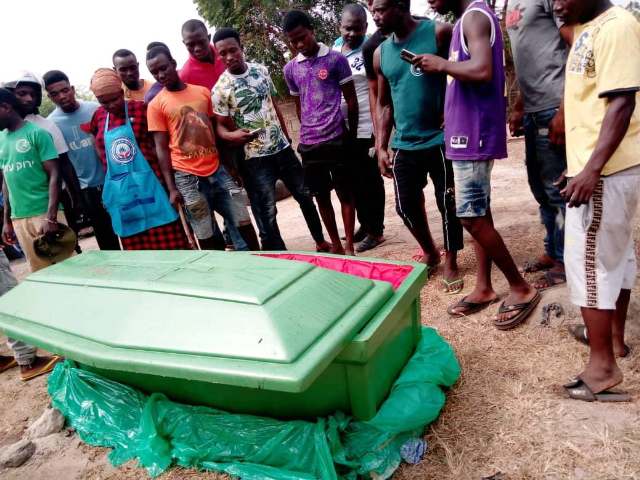 Residents of Sege are struggling to understand why someone would stuff a coffin with baby clothes and pieces of paper cut to the various sizes of banknotes and abandon it there.

Believed to be for ritual purposes, the draped coffin was seen at the outskirts of Sege, deepening the superstition and hysteria that had come to be associated with such spectacles.

Station Officer of the Sege police command, Chief Inspector Acquaye Francis said the police took possession of the coffin after a report was made by a local at around 18:20 hours.

“We found pieces of papers cut into money size, cloth (calico), Salt, Bottle that contain a substance we don’t know, incense and other items that showed clearly that it was meant for ritual purposes,”  he explained.

He said, “Police do not deal with spiritual issues but we have been mandated to protect lives and properties and I believe this might be somebody’s property and we should protect it”.

Some of the community members were upset upon seeing the casket and wants the leaders and police to protect them from such incidents because robbery and murder cases are now on the rise.

The Assembly Member for the area, Peaceman Ayiku called for investments in the area so that the youth would be employed and stop believing such cases illusions.

DISCLAIMER: The Views, Comments, Opinions, Contributions and Statements made by Readers and Contributors on this platform do not necessarily represent the views or policy of Multimedia Group Limited.
Tags:
Abandoned coffin
Controversy
Sege