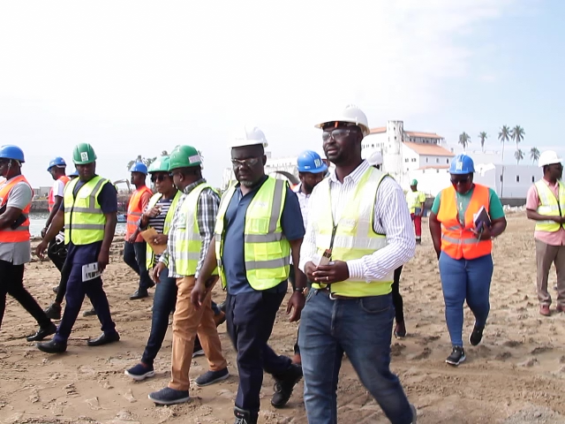 Sector Minister, Kwaku Ofori Asiamah, says the Elmina Fishing Harbour, which is being built, will be incomplete if the Fish Processing Plant is not operational.

The 11.6-million-dollar fish processing plant was commissioned in 2016.

Speaking in an interview with JoyNews after inspecting the Elmina Fishing Harbour project, the Transport Minister, Kwaku Ofori Asiamah, assured that the harbour project when completed will serve not only the people of Elmina but the people of Cape Coast and the Central Region in general.

He stated that, “We cannot have this facility fully functioning without the fish processing plant.”

“It’s because of the existence of the plant that we did not include the fish processing plant in the new construction. So, if there’s a problem with it, we need to refurbish it and keep it functioning.”

According to him, “there cannot be a fishing harbour without a fish processing plant, which includes a cold store. So, we need to have it ready.”

He asked the directors at the Ministry of Transport to liaise with the Ministry of Fisheries and Aquaculture Development for an assessment to be done in order for it to be incorporated into the plan.

Kwaku Ofori Asiamah expressed satisfaction with the rate of work currently ongoing at the site.

“I am really impressed with the quality and level of the construction that’s being done. The contractors tell me they are about 89% complete with the project and they are sure by January, 2023, the project will be ready,” he said.

Regarding the controversy surrounding the New Patriotic Party’s (NPP) claim that Cape Coast would get a harbour, the Minister said that the Ghana Ports and Harbours Authority has a master plan that specifies where ports should be located. According to the coordinates, Elmina is the location that makes the most sense for the harbour.

He said there shouldn’t be any cause for concern because once the harbour is completed, it will serve not only the residents of Elmina but also those of Cape Coast and all other areas within the Central Region.

He emphasized that , “In our GPHA master plan, we name ports according to our coordinates, and so if we say we will build a harbor in Cape Coast, building it at Elmina is part of an enclave to which Cape Coast belongs.”

“The most important thing is that the President promised to build the harbour, and he’s building it.”

The contractor for the project, Wim Van Hoof, explained the work done so far by Bellsea Limited Ghana.

He said, “It is called the Elmina Fishing Harbour Rehabilitation Project. Before we began this project, there were two breakwaters and we have worked on them. We have also done a huge reclamation of land from the sea. We are 90% complete, and by January 2023, we shall complete the project and hand it over to the Ministry.”

The 105 million euro project is expected to help shore up the fishing businesses of the people of Elmina, Cape Coast, and the Central Region.