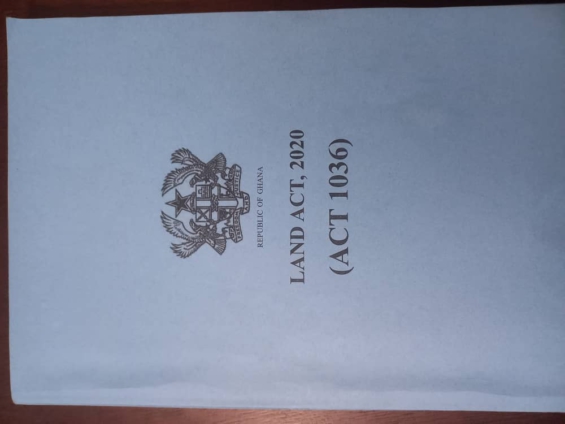 It was assented by the President of the Republic, Nana Addo Dankwa Akufo-Addo on the same date.

The Act was enacted among other things to revise, harmonize, and consolidate the laws on land to ensure sustainable land administration and management, effective and efficient land tenure and to provide for related matters.

It is worthy to indicate that the Act is drafted in three parts, namely;

It was passed with several innovative provisions that will promote sustainable land administration and management for effective and efficient land tenure.

This is aimed at enhancing transparency and accountability in land governance institutions.

The Act provides for the interest that arises from a transaction under customary law leasehold interest among others, that applies on an interest in Land in the duration which is certain on capable of being ascertained.

Also enshrined in the Act is restrictions on acquisitions on land by non-citizens that include not creating an interest in or right over land for prohibition of discriminatory practice in respect of land under Customary tenure, whether the Land is individually or communally held.

On family management of land, the Act designated the Lands Commission and the Office of Administrator of Stool Lands (OASL) to collaborate in the establishment and performance of functions in relations to customary land secretariat across the country.

Also included in the new Act is restrictions on exploration of Natural Resources, stating that, grant of family right shall not exceed nominated terms in case of poultry farming, or cultivation of cereals, tree, crops, timber or ranching.

This Act 1036 again makes significant improvements in safe-guarding spousal land rights in the context of Land acquired during marriage.

For instance, spouses names must be included when registering Land acquired for valuable consideration during marriages unless a contrary intention is expressed, and there is a presumption that any Land acquired during marriage by one spouse is co-owned by both spouses.

Section 47 of the Act prescribes conditions under which transfer or interest of land by spouse is restricted, unless a contrary intention is expressed in the agreement.

The State, the Act says may compulsorily acquire any land where the acquisition of that land is necessary.

It is therefore important that all stakeholders heed to the call by the Minister for Lands and Natural Resources, Samauel A. Jinapor and the Lands Commission for all to embrace the New Lands Act (1036) to, among others, help prevent unnecessary land and boundary disputes and ensure that the development of such lands are in accordance with the development plans of the communities.

Happily, the Act criminalizes activities of Land guards and stipulates stiffer punishment for persons who engage in it.

It recommends a minimum of five years jail term and a maximum of 15 years sentence for persons acting as land guards.

It is the Ministry’s fervent hope that with the inception of the New Land ACT, the menace of land guard activities will be tackled head-on.

“Land undoubtedly is our most valuable resource, we must therefore as Ghanaians collaborate with key actors to protect it at all times”

DISCLAIMER: The Views, Comments, Opinions, Contributions and Statements made by Readers and Contributors on this platform do not necessarily represent the views or policy of Multimedia Group Limited.
Tags:
Land Act