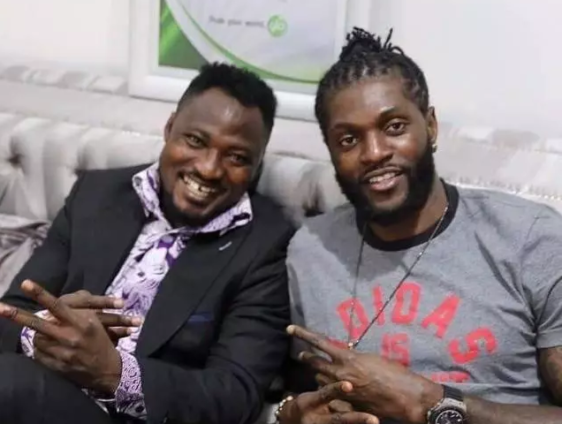 Actor Funny Face and Togolese football star Emmanuel Adebayor are back on talking terms few weeks after the latter unfollowed the former on Instagram.

Taking to the social media platform Adebayor shared a photo of himself and his comedian friend with a promise of staying with Funny Face through every struggle – and some heart emojis.

“I promise you one thing is to be there for you…no matter what that is not going to change I am here for you,” Adebayor wrote on his Instagram story.

However, the footballer is yet to follow the actor again on the social media platform.

Funny Face and Adebayor had fallen out of their friendship when the comedian insisted on continuing his feud with his colleagues Lil Win, Kalybos, Bismark the Joke and his ex-wife even though he had been advised against it.

The comedian who did not heed to the counsel wrote that Adebayor was disgraced because of his (Funny Face) actions.

Reacting to Adebayor’s message on Thursday The Cow and Chicken actor stated that he was ecstatic his friend had forgiven him.

Funny Face wrote on Instagram that he had to endure trolls after the celebrated footballer had unfollowed him.

Aoh Today .. I can sleep .. God bless you bro @e_adebayor .. the way people laugh me as u unfollow me .. only God can tell … now when u asked me not to talk .. I won’t talk .. even if I want to piss and u say funny don’t piss .. I won’t piss .. ankooosowa my money all finish … ebe CD I Dey sell now 😅🇬🇭🇬🇭🇹🇬 @e_adebayor Adebooooorrrrrrrbooooooooooorrrrrr .. bless up king 🤴.. @faddick and @bolarayofficial .. am people get ur money ready .. each of u is buying my album. 1 million dollars plus @e_adebayor .. 3 million dollars .. I have calculated ur money already .. am owing some people 😂🙏❤️ … @funnyfansofficial Tanx for ur support am back againnnnnnn 😅

DISCLAIMER: The Views, Comments, Opinions, Contributions and Statements made by Readers and Contributors on this platform do not necessarily represent the views or policy of Multimedia Group Limited.
Tags:
Emmanuel Adebayor
Funny face