AFCON Day 7 Wrap: Nigeria advance to next round, Salah scores in Egypt win 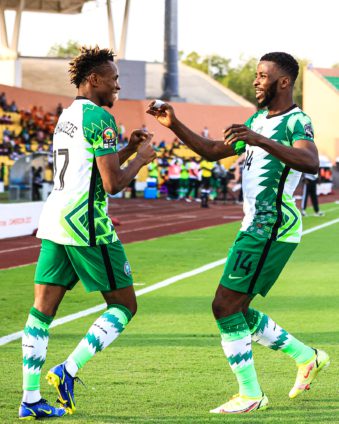 Nigeria became the latest team to book their place in the Round of 16 of the ongoing Africa Cup of Nations following their win over Sudan earlier on Saturday.

The Super Eagles recorded a 3-1 win over their opponents at the Roumde Adjia Stadium, as Samuel Chukwueze scored the fastest goal of this year’s competition, beating Max Gradel’s strike.

Nigeria head coach, Augustine Eguavoen named the same team that started in their opening game against Egypt on Saturday after being convinced with their performances.

Chukwueze broke the deadlock after just three minutes as the Villarreal forward scored from a Moses Simon assist.

Taiwo Awoniyi extended the lead west African side in additional time of the first half before Simon added a third just after the recess.

Sudan pulled one back on the 70th-minute mark as Walieldin Khidir converted from the penalty spot to finish the game 3-1 in favour of the Super Eagles.

In the other game in Group D, Mohammed Salah opened his scoring account at the 33rd edition of the AFCON as Egypt were held by Guinea Bissau.

The Liverpool forward hit the post in the first half of the game as the Pharaohs were held to a frustrating 0-0 scoreline in the opening 45 minutes. But Salah scored from a tight angle after receiving a lofted ball into his path from Amr Al-Sulaya to snatch the win.

Centre-referee, Pacifique Ndabihawenimana, after consultation with the Video Assistant Referees, ruled out Mama Balde’s strike for a foul on Omar Kamal in the build-up to the goal.

Saturday’s results mean Nigeria have sealed their place in the next stage of the competition after six points from their first two games while Egypt will now look to qualify in the last round of matches.