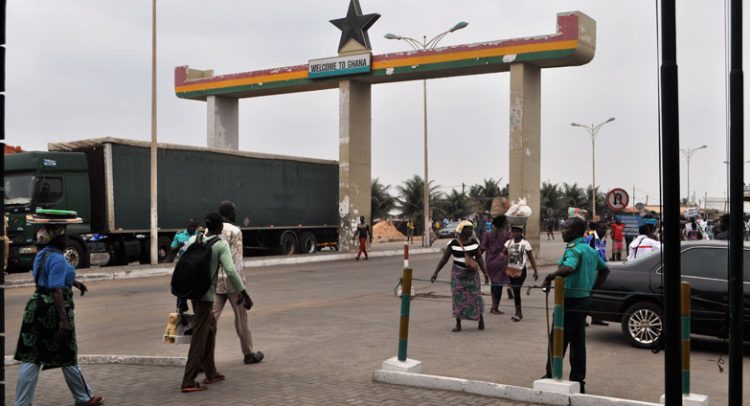 Paramount Chief of Aflao Traditional Area has appealed to government through the Ghana Bishops Conference to open the country’s land borders.

Torgbui Amenya Fiti V said this will promote businesses in the Area and further enhance the livelihood of his people.

The people of Aflao, mostly traders, have been badly hit by the impact of the Covid-19 pandemic.

As part of measures to curtail the spread of the virus, President Akufo-Addo announced the closure of the land borders in March.

The land borders have since remained closed.

Torgbui Fiti made this known when members of the Catholic Bishops Conference called on him as part of their ongoing 2020 Plenary Assembly underway at Keta-Akatsi Catholic Diocese, at Akatsi.

But a meeting which had the President of Ghana Catholic Bishops Conference and his entourage in attendance, the Paramount Chief of Aflao made the appealed.

Torgbui Amenya Fiti V said although government considers “politics, democracy and votes” what is important for him and his chiefs is the lives of the people following the border closure.

He further noted that opening the borders will bring relief to the people of Aflao, especially during this yuletide season for people to start their petty trading activities and get some money to celebrate.

“My people have been suffering since March this year. First, Covid-19, lockdown then border closure.

“We have no factories, no schools. My people cross over the border daily to Togo to engage in trading and even to fetch water yet, the border has since been closed.

“When the lockdown happened in Accra and Kumasi, they provided them with social services. Why not us? Take our cry to the government in Accra. The birth of Jesus is almost here. We’re not talking about the election, but Christmas. Let the land borders be open to enable our people trade, get money and celebrate the festival,” he said.

Archbishop of Tamale and President of Ghana Bishops Conference Most Rev. Philip Naameh, said the visit made the Conference to better understand the impact of the pandemic on the socio-economic lives of the people in the area.

He said whereas the government was thinking of controlling the pandemic, the Traditional Council was concerned about the livelihood of the people and prayed for things to return to normalcy.

The Plenary Assembly, which started November 06 will end on November 13, and would be climaxed with the 25th Anniversary celebration of Keta-Akatsi Catholic Diocese on November 15.