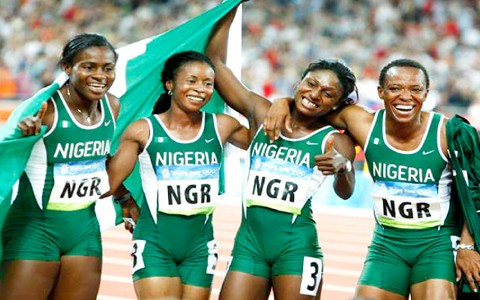 Nigeria’s quest of returning to the top again as the dominant power in track & field in the continent will begin Wednesday morning as the 18th African Senior Athletics Championships flag off in Port Novo, Benin Republic.

At the last edition at the Nyayo Stadium in central Nairobi, Kenya, Team Nigeria got edged to the second place despite running neck and neck with the host country till the last day.

But Wednesday, the stage is different with more Nigerian athletes at the top of their various events leading to the start of this edition in neighbouring Benin Republic. Team Nigeria won eight gold medals at the last edition out of which seven of them came from female athletes alone.

The incredible, championships record-setting feats put up by compatriots like Clement Chukwu, Seun Ogunkoya, Falilat Ogunkoya, Glory Alozie and Chioma Ajunwa are capable of being repeated here at this edition by the present gladiators

With 46 athletes, led by Blessing Okagbare and Amaechi Morton, a change in fortune looks very likely. The determining factor for Nigeria will be the performance of the men.

The presence of Amaechi in the team has increased the team’s chances of topping the medals table. Below is an insight into some of the men and women who will attempt to make history for themselves and Nigeria.

100m: Two years ago both Obinna Metu and Ogho Oghene Egwero failed to match the feats of Olusoji Fasuba who became the first male sprinter to set a championship record, winning three consecutive 100m titles. But after Nigerians saw the gritty manner with which the duo of Metu and Egwero finished the event in Calabar last week, podium placement is certain for Nigeria.

Metu, who raced to the front, is the one to look up to in Port Novo Thursday when the 100m final is run. He is so far the second fastest African behind South Africa’s Simon Magakwe, who holds a pre-championships’ best of 10.06s.

200m: Metu and Noah Akwu are capable of returning Nigeria to winning ways in the event in Port Novo.
Although going by current form, the pendulum is swinging towards South Africa who holds the three fastest times run by Africans so far this year. Anaso Jabodwan (20.32), Simon Magakwe (20.38A) and Thuso Mgwang (20.44A) have put the South Africans in pole position in this race but Metu (20.91 seconds season’s best) who upturned form books to win the national title in Calabar last week has proved he has the big occasion temperament and could swing the pendulum back to Nigeria.

400m: It looks as bright as daylight that the quarter mile gold will not be among the medals Nigeria will be banking on to return to the top of the medals table as overall African
champions at this edition.

Abiola Onakoya is not likely going to ruffle any feathers. Two years ago, it was Libya’s Mohammed Khwarjah, coached by Nigeria’s most successful coach of the last two decades, Tony Osheku who claimed the gold with a scorching 44.99 seconds run. This year, Sudan’s Rabah Yousif holds the aces.

Long Jump: Two years ago, Stanley Gbagbeke’s 8.06m leap landed him in the bronze medal position. This year, his incredible 8.20m leap last week at the Calabar national trials has not only lifted him into the joint fourth best outdoor performance in the Nigerian all-time list but also in front of the queue behind defending champion, Godfrey Mokoena (8.29m season’s best) of South Africa as one of the serious contenders for the title.

400m Hurdles: USA-based Amaechi Morton, who has grown from a starry-eyed kid of three years ago to become one of the best quarter-mile hurdlers in the world this year, is favourite for gold.

With a 48.79 personal best set early this month to win the NCAA title in the USA, Morton looks the real deal to stop South Africa’s Louis Van Zyl from making it four back-to-back wins.

Henry Amike (1989) and Sylvester Omodiale (2000) are the only Nigerians to have won medals here.

Triple Jump: Reigning king of the event, Nigeria’s Tosin Oke looks a cast iron certainty to retain the gold medal he won in his first attempt two years ago at the championships’ 17th edition in Nairobi, Kenya.

Oke needed a new personal best to win the title and was just one centimetre short of the 17.23m championships record set by Ghana’s Andrew Owusu in
1998.

100m: This is going to be another stroll in the park for Blessing Okagbare who scorched to a new 11.03 seconds championships record to win the gold medal two years ago in Nairobi, Kenya.

200m: Cote d’Ivoire’s Ahoure is the favourite to race to the gold in this event. She holds a personal best of 22.42 seconds, the fastest time by an African since 1998 when Falilat Ogunkoya ran 22.22 and 22.25 seconds to win the African title in Dakar, Senegal and silver in the IAAF World Cup in Johannesburg, South Africa respectively.

Okagbare holds a personal best of 22.63 seconds and has been flying very high in the circuit so far this year.

400m: If there is any event to highlight the lowest point of Nigeria’s decline in track and field, the women’s 400m will top the bill.

Botswana’s Amantle owns the championships record at 49.83 seconds and will stroll to her third consecutive gold medal in Port Novo!

100m Hurdles: Seun Adigun will successfully hurdle to her second consecutive gold medal in the championships and extends Nigeria’s total haul in the event to 11.

400m Hurdles: Two years ago, Ajoke Muizat Odumosu was sensationally beaten to the gold medal by Morocco’s Hayat Lambarki despite coming to the championships as pre-championships fastest woman in the event. This time, the scenario looks very much like it was two years ago.

Odumosu who has become the best African woman 400m barrier runner since Morocco’s Nezha Bidoaune left the scene at the start of the last decade has been in awesome form this season, breaking 56 seconds on five occasions, capping it with a 55.03 seconds personal season’s best and fastest time in Africa this year.

High Jump: With Doreen Amata just coming to form, this may not the best time for Nigeria to challenge for her first title in the event since the championships was flagged off in 1979. Her 1.84m to win the Nigerian Trials in Calabar may place her on the podium.

Long Jump: Defending champion, Blessing Okagbare’s 6.97m gold-winning leap last week at the Nigeria Olympic trials in Calabar has firmly put her on the podium to retain her status as African champions.

Shot Put: Since Vivian Chukwuemeka won Nigeria’s first title in this event in 2002, the year she was also crowned Commonwealth champion, it has become a near one-way Nigerian affair.

This edition will not be in anyway different as Chukwuemeka has returned to reclaim it.