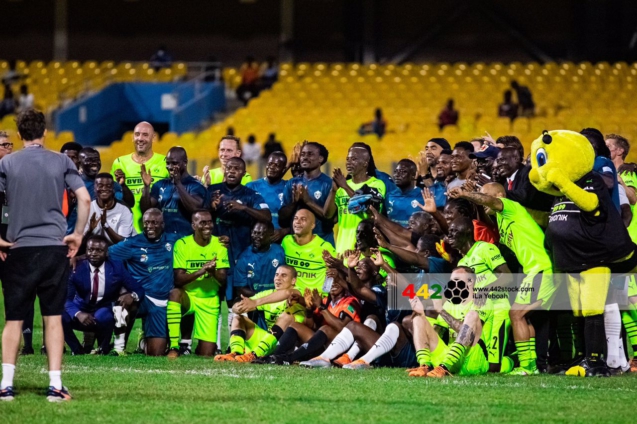 Former Black Stars forward, Prince Tagoe, came from the bench to score late in the game as the African Giants held Borussia Dortmund Legends to a draw at the Accra Sports Stadium on Saturday, June 11.

The encounter was the crowning moments of the German club’s visit to Ghana as part of their partnership with Division Two side, Shooting Stars.

In a keenly contested game, former players such as Sammy Kufour, Awudu Issaka, Stephen Appiah, Charles Taylor and many others played for the continent’s Giants.

Augustine Arhinful opened the scoring at the Accra Sports Stadium, finishing off with a well-played pass from Appiah to give the African Giants the lead.

However, Zidan stepped up and converted from the spot to draw the visitors’ level heading into the break.

Following the return from recess, former Dortmund star and World Cup winner, Kevin Grobkreutz, put the German side in the lead when he hit the ball beyond the reach of former Hearts of Oak goalkeeper Sammy Adjei.

Tagoe was introduced into the game with less than 15 minutes left to play. The German side on the brink of sealing a 2-1 victory.

But a good combination of passes involving Kwadwo Asamoah and Kwame Ayew saw Tagoe at the end of the latter’s tricky flick beating shot-topper Weidenfeller to equalise for the host team and ensure the game ends with a 2-2 scoreline.

Former Black Stars Abedi Pele issued instructions on the touchlines to the African Giants as they avoided defeat.