Afro Nation: Meek Mill sticks a neck out for Young Thug, Tiwa’s shoes could literally not hold her on Day 1 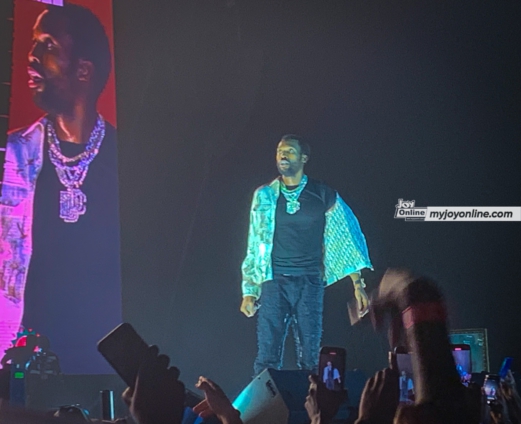 There is no doubt that Nigeria’s talent pool musically barely ever sees a dry run, which makes one wonder how Tiwa Savage is still killing it despite the emergence of new acts breaking through the scene.

Tiwa was the sixth act at Afro Nation Ghana and her initial set of performances felt refreshing as ever.

The 42-year-old’s showmanship proved why she remains relevant after over a decade in the game. But even she would not rest on her laurels for her next set.

“I look expensive but I have to take these shoes off. Because I heard you guys paid too much money, so I want to give you your money’s worth,” she said.

Immediately, her sole touched the ground, she drove into ‘My Darling’ and never looked back as she went hit after hit.

While performing her Asake-featured ‘Loaded’ song, she reiterated how much of her mistakes she is willing to own as human as she is.

Ahead of her performance was Ku Lo Sa hitmaker, Oxlade. From Sarkodie’s Non Living Thing to the Afrobeats’ musician’s fan favourites, he was epic.

Did @oxladeofficial really have to take us this far? This rendition at #AfroNationGhana is refreshingly soothing😍 pic.twitter.com/PSQWknyaFX

CKay also did his bid on the night which was opened by Gyakie and Kuami Eugene respectively.

In between that was another exhilarating one from Kamo Mphela.

Finally, Meek Mill’s dreams came true, but with an accompanying nightmare. The King of Philly had earlier communicated his passion to visit Africa, and Afro Nation was a good chance to make that happen.

On Thursday night, the American rapper did his final set at the festival which happened at the Marine Drive, Black Star Square.

But his commute to the premises ahead of his performance was a turbulent one. He was mobbed by fans excited to see their superstar which led to his phone getting allegedly stolen.

But that did not deter the 35-year-old rapper who had been popping-a-wheelie all night long the previous day in Accra’s streets.

Popping-a-wheelie is an acrobatic driving or riding stunt of lifting up the front tire.

Meek could not hide the love received from Ghanaians since he touched down.

He also took a moment to address solicit support for a colleague in the game, Young Thug who is currently in a legal battle with the US Courts.

🇺🇸US rapper, Young Thug is set to face trial with 14 co-defendants in a RICO indictment against YSL members in May. 7 of an initial 28 defendants accepted plea deals, 6 more to be tried later. pic.twitter.com/pVjrfq3Bl2

US rapper, Young Thug is set to face trial with 14 co-defendants in a RICO indictment against YSL members in May. Seven of an initial 28 defendants accepted plea deals, six more are to be tried later.

P Square crowned the night with a thrilling showdown to close Day 1 of what was nothing short of a cracker.

Friday ushers in the final batch of stars to create lasting memories with music lovers.

DISCLAIMER: The Views, Comments, Opinions, Contributions and Statements made by Readers and Contributors on this platform do not necessarily represent the views or policy of Multimedia Group Limited.
Tags:
Afro Nation
Meek Mill
Tiwa Savage
Young Thug