Agbogbloshie decongestion: ‘No one is coming back, it is done!’ – Henry Quartey 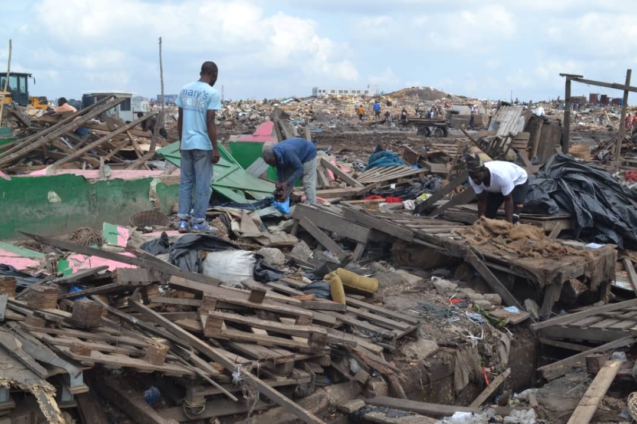 Greater Accra Regional Minister Henry Quartey says no one will be allowed to return to the now-demolished Agbogbloshie onion market.

This follows an exercise to relocate onion sellers, livestock rearers and scrap dealers from that enclave to a spot at Adjen Kotoku.

After several attempts to get them relocated in the past two decades, the move finally happened on Thursday.

What was intended to be a peaceful exercise turned chaotic when some men started throwing items at the police and military men stationed at the market.

Police on the grounds used teargas and fired rubber bullets to disperse the rioting traders.

Director of Operations for Accra Region police, DSP Kwesi Ofori, said the measure became necessary when persons he alleges to be criminals, attempted to impede the relocation exercise.

The Regional Security Council in Accra says it has sanctioned a joint police and military taskforce to be stationed at Agbogbloshie market for the next seven days as it relocates onion sellers from their current spot to Adjen Kotoku.

The decongestion of the market is part of the Minister’s ‘Let’s Make Accra Work’ agenda.

He admitted that there was an initial resistance, but was impressed that the traders are adhering to the directive adding that no one will be allowed to return to the place.

He continued to say, “you know when I started this thing, everybody said it cannot happen. But please read my lips, no one is coming back here. It is done”, he said.

Earlier, the police fired tear gas and warning shots to disperse a rioting group of scrap dealers who were opposing the relocation exercise.

The Operation’s Commander, DSP Kwesi Ofori, told JoyNews that the crowd controlling strategies implemented were necessitated due to some “criminal elements” who tried to disrupt normal business in the area.

He said the joint security task force was sent to the Market to ensure peace and protect the traders and their belongings from thieves.

He said “it is a peaceful exercise that has been discussed and planned regarding the evacuation of onion traders from Agbogbloshie to Adjen Kotoku.

“The market women have fully cooperated and they are not even here currently, because they are even setting up at Adjen Kotoku. But it is some criminal elements that want to take advantage of the situation to mar the operation”.