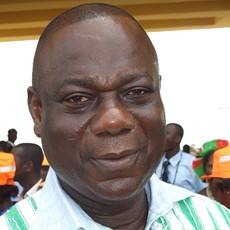 George Aggudey, a former Presidential candidate of the Convention People’s Party (CPP), who was to serve time in prison for defaulting on the payment of Social Security and National Insurance Trust (SSNIT) contributions of his workers, was on Thursday granted bail.

This was after Aggudey, in the company of his lawyer, appeared before an Accra Fast Track High Court to apply for bail on medical grounds. He is serving a three-month prison sentence.

The presiding judge, Justice Habib Mustapaha Logoh, granted bail in the sum GH¢ 2 million with two sureties to Aggudey, who appeared in court with a walking stick.

Earlier Kwamina Baiden, counsel for Aggudey, asked the court to grant bail to the boss of Gocrest Security Company whom he said had been genuinely unwell for some time now as a result of which he was receiving medical attention.

He said his client was a responsible person and had persons ready to stand surety for him.

However, Rexford Wiredu, the principal state attorney in the case, asked the court to refuse Aggudey bail because illness should not be used as grounds for seeking bail.

Mr. Rexford said the accused person wanted to be granted bail on health grounds to avoid starting his jail term and prayed the court to deny him bail.

Aggudey has since deposited documents on landed property worth his bail amount in the court.

The Chief Executive Officer (CEO) of Gocrest was sentenced to three months’ imprisonment by an Accra District Court on August 14, this year.