Akufo-Addo encouraged me to become a lawyer, paid my fees – Justin Frimpong Kodua 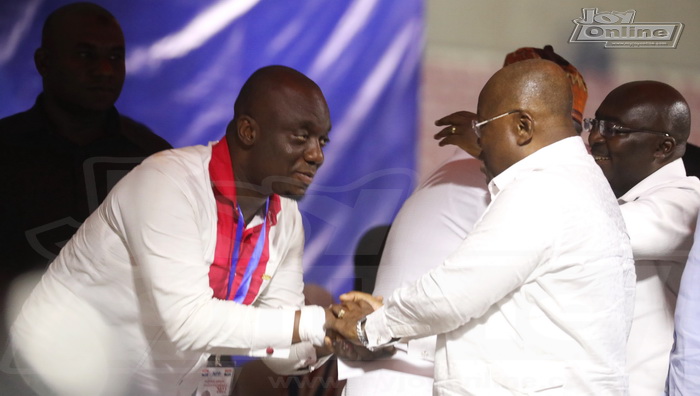 The General Secretary of the New Patriotic Party (NPP), Justin Frimpong Kodua has revealed the role President Akufo-Addo played in his decision to become a lawyer.

According to him, it was the President who even encouraged him to read law in addition to his ambition to be a politician.

JFK, as he is popularly called, recalled that as a vibrant young man – who was born into a family of NPP stalwarts – his dream was to be a full-time politician.

However, that was destined to change when he escorted a leading Member of the party in 2009 to visit President Akufo-Addo at his Nima residence.

“Immediately he [Nana Addo] saw me, he said ‘Kodua, we lost the elections. Now we are both unemployed’. And we all just laughed,” he reminisced.

Prior to this visitation, Mr Kodua said he had first met President Akufo-Addo at the Kwame Nkrumah University of Science and Technology (KNUST) where he was a Student Leader in 2005.

He said he made an impression on the President who was then the Foreign Minister.

“I remember he said to me, ‘Young man, you are very eloquent and I will like you to be part of the young people I will groom in the party’,” JFK recalled.

The short interaction was enough for Mr Kodua to consider President Akufo-Addo as a mentor in his political career.

Therefore, when he visited the President at his home and was asked what his aspirations were, he did not hold back.

“I was very honest with him, I told him I wanted to pursue politics as a career. So he advised me then – that was 2009 – that if I am interested in politics and it is something I want to do as a full-time job why don’t I go to law school. For that one, you have a backup profession and you don’t need to rely on someone to give you employment.

“You know, the moment you get into politics, you are ‘tainted’ and if you are not careful and your government loses elections, people will be uncomfortable employing you but if you are a lawyer, you can be self-employed,” he told Evans Mensah on JoyNews’ PM Express.

Mr Kodua said the then opposition leader didn’t end there, he went a step further to pay for his fees for his first term in law school.

“That was in 2010, and that was how I went into law school. In fact, it was one of the best advice anyone has given to me,” he was categorical.

DISCLAIMER: The Views, Comments, Opinions, Contributions and Statements made by Readers and Contributors on this platform do not necessarily represent the views or policy of Multimedia Group Limited.
Tags:
Justice Frimpong Kodua
Lawyer
New Patriotic Party
President Akufo-Addo
School Fees