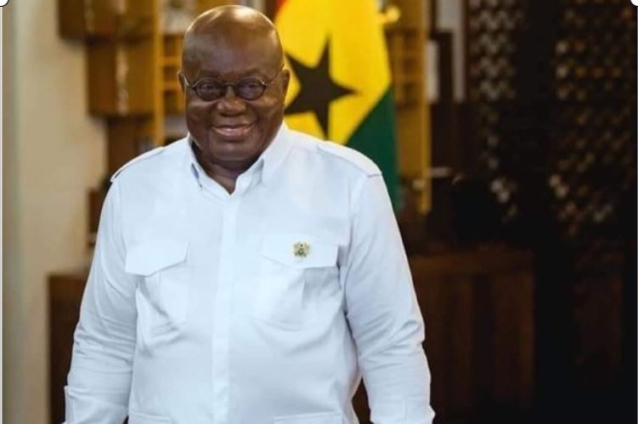 President Akufo-Addo on Tuesday had a triple celebration at his residence at Nima.

He commemorated his 78th birthday, the passage of the e-levy by Parliament, and the victory of the Ghana Black Stars over Nigeria’s Super Eagles.

In a video that has gone vial on social media, Vice President, Dr Mahamudu Bawumia, Director of Communications at the President’s Office Eugene Arhin, some security personnel, and a group of overjoyed people were seen celebrating with the President.

Also in the video, a jubilant crowd was seen chanting and jumping in unison, throwing their hands in the air as they sang a victory song.

After the chants, the fans sang the happy birthday song for President Akufo-Addo.

Various state officials also added their voices to the many praising President Akufo-Addo. They prayed for good health and strength on his behalf to be able to complete his second tenure.

Information Minister Kojo Oppong Nkrumah tweeted: “Happy Birthday to the Boss!!! For a 78year old man, your energy is amazing. May God continue to give you strength.”

Happy Birthday to the Boss!!! For a 78year old man, your energy is amazing. May God continue to give you strength. pic.twitter.com/Jj3B35RrUc

Happy 78th birthday @NakufoAddo. May Allah continue to protect and guide you. Have a great day, Mr. President. pic.twitter.com/uFObfaGU37