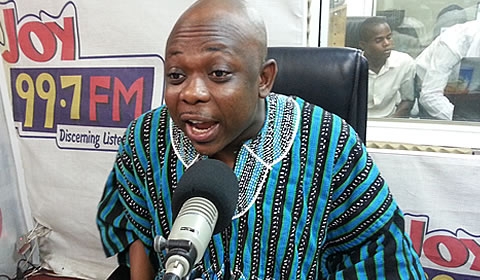 A deputy Interior Minister James Agalga has challenged the 2012 presidential candidate of the New Patriotic Party to purge himself of the infamous All-die-be-die mantra which he used in the run-up to the 2012 elections.

He maintains Nana Akufo-Addo must "openly denounce" the mantra and apologise for it. Only then would he be seen to have learnt his lessons from the past.

The All-die-be-die made the headlines in the 2012 elections when the then New Patriotic Party flagebearer, Akufo-Addo admonished party supporters to be vigilant and be ready to defend themselves even at the peril of their lives.

His opponents described the call as violent and tagged Nana Akufo-Addo as a violent person who wanted to win the elections at all cost.

Having officially announced his intention to contest the 2016 elections after a six-months  hiatus from front-line politics, there has been a sudden resuscitation of the all-die-be-die ghost with critics challenging Nana Addo to denounce the mantra.

Even in his official declaration of intent, Thursday, Akufo-Addo said he had made mistakes in his political career in the past and made comments which on hindsight he could  have put better. Spokespersons of the NPP say that is a bold admission that the NPP front runner has apologised for the All-die-be-die  slogan but critics are not impressed.

James Agalga is one of them and believes  Nana Akufo-Addo should be bold to openly denounce the mantra.

He said just like in 1998 when Akufo-Addo openly denied assertions he was going to form a political party after he lost the NPP primaries to JA Kufuor, he should come out publicly to denounce the violent slogan.

But the Editor in Chief of the Crusading Guide Newspaper Kweku Baako Jnr said the NDC cannot invite Nana Addo to denounce their own "distorted interpretation of the all-die-be-die" mantra.

He argued that the conduct of NPP and Nana Akufo-Addo in the post 2012 elections shows that the all-die-be-die propaganda, for whatever its worth, has been "murdered and buried."

He said the strategy of the NDC was to portray  Nana Akufo-Addo as a violent person but his conduct after the elections- choosing to go to court instead of going onto the streets to contest the election results- rather won him global admiration.