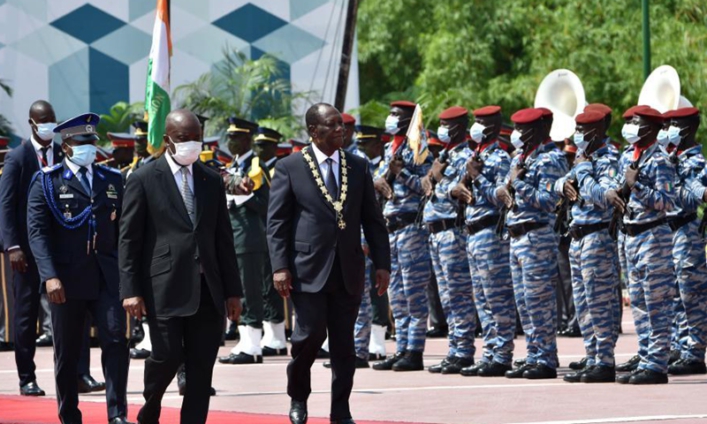 Cote d’Ivoire’s President Alassane Ouattara officially inaugurated on Monday his third term as head of Cote d’Ivoire at the presidential palace in Abidjan.

This is the first time that an elected president has been sworn in on the Constitution in Cote d’Ivoire.

The oath-taking hearing was conducted by the President of the Constitutional Council, Mamadou Kone, in the presence of members of this institution.

An audience of high-level personalities including a dozen Heads of State and Government mainly from the Economic Community of West African States (ECOWAS), diplomats accredited in Cote d’Ivoire and civilian personalities, and national soldiers, among others, attended the ceremony, including the former leaders from other countries such as Nicolas Sarkozy (France), Goodluck Jonathan (Nigeria) and Ernest Bai Koroma (Sierra Leone), as well as the Minister of Foreign Affairs of France, Jean-Yves Le Drian.

In a solemn address, Alassane Ouattara said he was “proud and grateful” for the renewed confidence in him. “It is with great honor and responsibility that I took the oath,” said Alassane Ouattara, before making the commitment to “fully” assume his office.

Alassane Ouattara condemned with “the greatest firmness” the murderous violence during the ballot and insisted that “these acts must not go unpunished”.

He also noted the economic momentum that Cote d’Ivoire is experiencing with a “marked improvement” in the living conditions of the populations and a “reduction in poverty”.

“For this new mandate, we will offer more opportunities to every Ivorian, the priority will be centered on the education, training and employment of young people,” he said.

“We will ensure that the structural transformation of the economy creates jobs”, continued Alassane Ouattara not without insisting on other priorities, including the empowerment of women and the improvement of the quality of care offer.

Alassane Ouattara also made a commitment to promote national reconciliation and social cohesion, notably through the resumption of dialogue with the opposition for the holding of legislative elections ” in the first quarter of the year 2021″.

Alassane Ouattara was declared re-elected with 94.27 percent of the vote in the first round of the October 31 presidential election.

DISCLAIMER: The Views, Comments, Opinions, Contributions and Statements made by Readers and Contributors on this platform do not necessarily represent the views or policy of Multimedia Group Limited.
Tags:
Alassane Ouattara
Cote dIvoire