All must be involved in fight against human trafficking – Queenmother 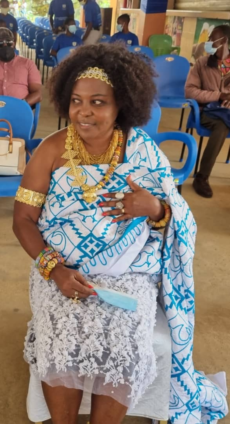 An appeal has been made to all Ghanaians to join the fight against human trafficking, which has distorted the future of many young children and the youth in the country.

Mama Sreku IV, Queenmother of Mepe- Avetakpo in the North Tongu District of the Volta Region, said that was the only way through which the future of the young ones could be guaranteed.

“Human trafficking is, without doubt, a modern form of slavery. The victims are not captured by force like in the slavery days but poverty being the overriding pull factor.”

Mama Sreku IV admonished parents to investigate the background of every helper well before releasing their children to them, no matter how much they offered.

She made the call during an address to mark the commemoration of World Day Against Human Trafficking in Persons.

The event, held at Mepe in the Volta region was on the theme “Human Trafficking can end, the time is now! Take action to stop all forms of exploitation.”

Mama Sreku also urged parents to endeavour to work hard to take care of their children since shortcuts were sometimes dangerous.

She indicated that human trafficking like many other criminal activities was a huge problem that needed to be stopped early.

“The solution to this seemingly humongous problem would be tackling it from the micro-level. It is at this level that the traditional leaders, especially queen mothers can help if empowered as well as continuously sensitizing with constant education in every community in the country”.

Mama Sreku further appealed to the government and others, to help equip traditional leaders with the needed resources to enable them perform such duties.

“Involve us and let us all work together to eradicate this menace of human trafficking,” she added.

Dr Afisah Zakaria, Director, Ministry of Gender, Children and Social Protection, in a speech read on her behalf, called on traditional authorities, transport owners, assemblymen, market leaders, and all individuals to rise to the challenge of fighting the canker, which had the tendency to further increase the woes of victims, child exploitation, sexual exploitation, and smuggling of migrants through unapproved routes around the borders of the country.

He said there had been several activities marking the day which included, stakeholder dialogues to review the progress made in the implementation of the Human Trafficking National Plan of Action, which spanned from 2017 to 2021, and that “a technical working group was inaugurated to guide the process”.

The United Nations has scheduled July 30 of every year as the World Day Against Human Trafficking in Persons, also known as ‘Blue Day’ to create awareness on the dangers associated with human trafficking, worst forms of child labour, and all forms of exploitation.

Officers from the Anti Human Trafficking Unit of the Ghana Police Service and the Immigration Service were in attendance to educate participants on the tricks and strategies that traffickers use in trafficking children and youth in Ghana for exploitation either in Ghana or abroad.

Focus was also on using education, prevention and advocacy as some main pillars to empower people against child trafficking and its menace.

Mr Richard Collins Arku, the District Chief Executive (DCE) for North Tongu on his part, stressed that the law will deal with those engaging in such acts if they were caught.

Hajia Lariba Zuweira Abudu, Deputy Minister for Gender, Children and Social Protection, in his keynote address, said Ghana as a country had chopped many successes and it was rated on tier two ranking for the US Department of Labour Country rankings.

Mrs Eyra Thywill Kpe, the Volta Regional Director of the Department of Gender, appealed to parents and all participants to avoid unacceptable acts such as child labour, gender-based violence and teenage pregnancy among others.

Mr Kosi Hotor, the Presiding Member of the North Tongu District Assembly who chaired the event, commended the organisers for choosing the District as the venue for the national event.

Community members from North Tongu, Central, and South Tongu which have been identified as the hotspots of modern slavery in the form of trokosi were in attendance to witness the occasion.