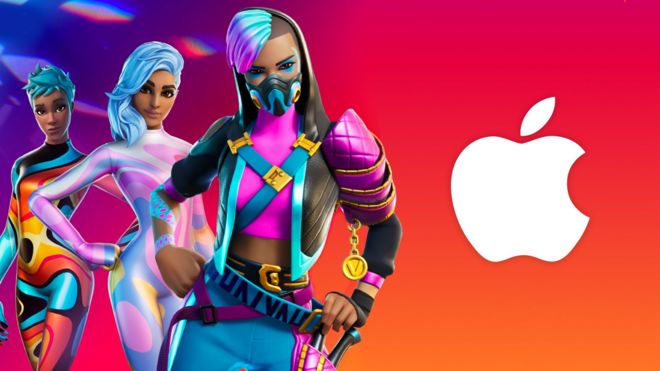 Apple has terminated Epic Games’s account from its App Store amid a legal battle over in-app payments on the Fortnite game.

Apple had already removed Fortnite from the store after the game offered a discount on its virtual currency for purchases made outside of the app, from which Apple receives a 30% cut.

Epic says the fee is unfair.

The company sued Apple earlier this year after it took down the hugely popular Fortnite from its App Store.

“We are disappointed that we have had to terminate the Epic Games account on the App Store,” Apple said in a statement.

“We have worked with the team at Epic Games for many years on their launches and releases. The court recommended that Epic comply with the App Store guidelines while their case moves forward, guidelines they’ve followed for the past decade until they created this situation. Epic has refused.”

The suspension means Epic can no longer make apps for the iPhone or iPad.

It has previously accused Apple of operating “a complete monopoly” over the one billion users of its operating system, which underpins all Apple devices, including the iPhone, iPad and Macbook.

Apple has said that Epic has itself benefited from being on the App Store and had “grown into a multibillion dollar business”.

Epic is not the first developer to take issue with the App Store’s fee structure, although it is perhaps the biggest.

In June, an email app called Hey also took a stand against it.

The EU is investigating whether Apple’s App Store conditions violate its competition rules.