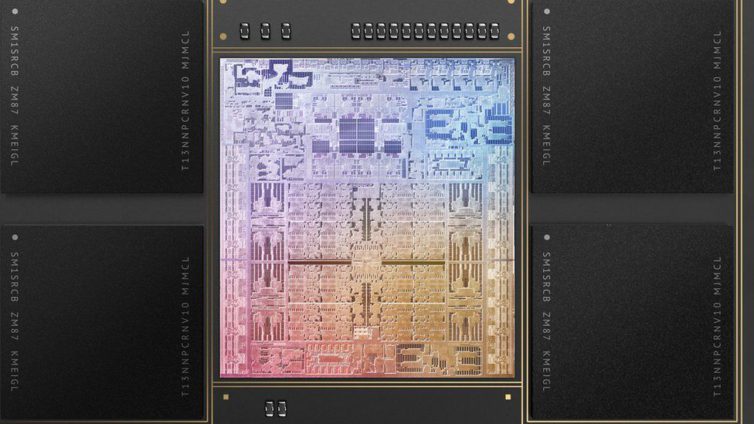 Apple says the M1 Max chip, with 57 billion transistors is the most powerful it has ever built.

The new chips were announced almost a year after the firm revealed its first Mac computers powered by silicon of its own design.

It comes after reports that Apple cut its iPhone 13 production targets amid the global computer chip shortage.

Apple claims the new chips will achieve comparable performance to the latest 8-core PC laptop chip running at top speed while using 70% of the power.

Going flat-out the chip, the company claimed, would be up to 1.7 times faster than the 8-core PC chip.

Such claims have not yet been independently verified.

Apple’s chips are sometimes referred to as being ‘Arm-based’ because it licenses the instruction sets from the British-based company of that name.

These instruction sets determine how processors handle commands. However, the core processor circuits are of Apple’s own design.

For years Apple has used chips designed by Intel. The move to designing its own silicon has been positive for the firm, says Ben Wood, chief analyst of CCS Insight.

“The advent of Apple Silicon has been a shot in the arm for the MacBook line-up,” he said.

The two chips power the new 14in and 16in MacBook Pro laptops and a new operating system, macOS Monterey.

There has been a sense, one analyst said, that workers in creative industries are starting to drift away from the Macbook Pro.

But they would find the new machines appealing, according to Ms Kitagawa. “Apple is really defending the creative professional market which is their core market,” she said.

The MacBooks were unveiled at a time when the company has warned of the impact of the global chip shortage.

Apple designed-silicon will not, Ben Wood says, insulate the company from the shortage.

“The fact that Apple has designed its own chips does not necessarily mean it is immune from the wider chipset shortages,” he said.

“There is little doubt it will be in a strong position to secure supply, but ultimately the overall shortage of semiconductors comes down to manufacturing capacity.”

Ms Kitagawa also noted that as dedicated graphics chips (GPUs) are in short supply, the new MacBook Pros may be “more immune to the shortage as the machine does not have discrete graphics: one less component that they need to worry about.”

In particular the abandonment of Magsafe – a magnetically secured power-supply that releases with a firm pull.

Ben Wood said, “many users will be ecstatic that the MagSafe power connector has returned. When you’ve invested a small fortune in a MacBook, the last thing you want is for a careless trip over a power cable to see it crashing off the desk onto the floor.”

DISCLAIMER: The Views, Comments, Opinions, Contributions and Statements made by Readers and Contributors on this platform do not necessarily represent the views or policy of Multimedia Group Limited.
Tags:
Apple
Computer chips
M1Pro and M1Max chips