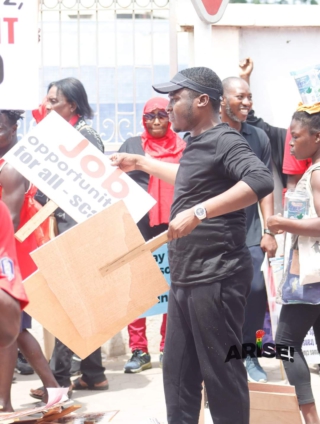 The Ghana Police Service has provided education to the public on modalities for holding special events including demonstrations.

This comes a week after a protest by pressure group, Arise Ghana turned chaotic on the first day.

“Following the violence that characterised the Arise Ghana Demonstration in Accra on Tuesday, 28th June, 2022, the Police wish to take the opportunity to educate the general public on the law that guides the holding of special events including demonstrations,” a public education document issued by the Police indicated.

The document issued on July 6 “is aimed at informing everyone on the rights and responsibilities assigned by the law to organisers and demonstrators as well as guide their conduct during such events.”

The document sighted by myjoyonline.com lists some responsibilities of the Police in cases of demonstrations as; controlling routes and crowds by directing the routes of the event to prevent obstruction of pedestrians or vehicular traffic and mandate to disperse crowds at a special event where the Police have reasonable grounds to believe that a breach of the peace is likely to occur.

Other responsibilities are; to arrest all who break the law during special events and bring them to face justice and power to cause the streets or parts of the streets of the area where the special event is being held to be closed to pedestrian or vehicular traffic.

“We would like to urge the public to take note of the law and work together with the Police to ensure the safety and security of all persons as we work to maintain law and order,” the document noted.

On Tuesday, June 28 the protest by Arise Ghana turned chaotic with Police and protestors exchanging stones and teargas during a standoff in the afternoon.

The protestors who were demonstrating against the worsening economic hardship in the country were accused by the Police of trying to use unapproved routes.

Twenty-nine of the protestors were arrested for their involvement in the chaos during the demonstration and subsequently granted Police enquiry bail.

The Police administration in a statement announced that two of its personnel who sustained injuries during the protest were undergoing surgery.

It said 15 of its officers were also injured during the protest.

“The number of officers who were injured during the first day of the Arise Ghana demonstration increased from twelve (12) to fifteen (15). All the officers are being treated at the Police Hospital with two (2) undergoing emergency surgery,” the Police statement said.

DISCLAIMER: The Views, Comments, Opinions, Contributions and Statements made by Readers and Contributors on this platform do not necessarily represent the views or policy of Multimedia Group Limited.
Tags:
Arise Ghana demo
Demonstration
Ghana Police Service