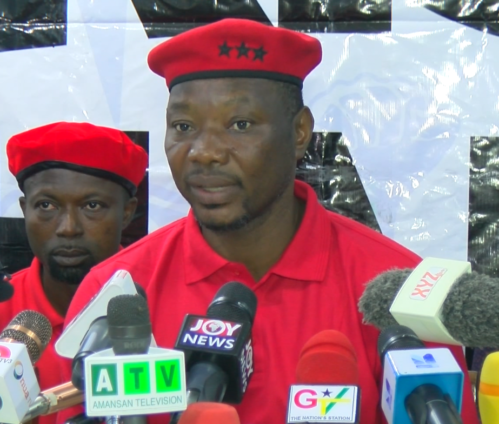 The leadership of civil advocacy group, Arise Ghana has disclosed that one of the protesters in its June 28 demonstration has been confirmed blind in his right eye.

Addressing a press conference on Tuesday, convener of the group, Bernard Mornarh revealed that, based on a doctor’s report, the victim, Nii Ayi-Mensah will no longer be able to see in his right eye.

Mr Mornarh said Nii Ayi is one of 93 other protesters who were injured during the two-day demonstration in Accra.

“What is most painful is the case of Comrade Nii Ayi-Mensah. One of the victims of the reckless Police brutalities of the 28th June 2022, who was hit by a rubber bullet in his right eye. And has been declared blind in that eye by doctors at the Eye Center at the Korle-Bu Teaching Hospital”, Bernard Mornarh said.

He added that, “as a result of the unprofessional and lawless conduct of the Dampare-led Police, many innocent Ghanaians were injured. From information so far, 93 peaceful protestors sustained varying forms of injury ranging from fractures to rubber bullet wounds among others.

The leadership of Arise Ghana has since visited some of the victims and has borne the cost of their treatment”.

On the back of this, Mr. Mornah reiterated the group’s reservations with the conduct of the Police during the two-day protest.

“It is unconscionable that one of the provocateurs who threw the first stone at his colleagues in uniform and was arrested by us and handed over to the Ghana Police has been left off the hook. While these rather innocent peaceful protesters are being persecuted for no wrong done.

In fact, video footages have shown that even before the first stone was thrown at the Police, they had already fired several tear gas canisters, so we are more than convinced that the violence was orchestrated and rehearsed by the Ghana Police Service acting on the behalf of the intolerant Akufo-Addo government”, Mr. Mornarh said.

Meanwhile, the group has stressed that despite the unfortunate developments that marred its two-day protest, it will continue to mount pressure on government to address the hardship in the country.

“In keeping with our mandate and objective, Arise Ghana will be staging a second of its intended nationwide demonstrations on the 22nd of August in Kumasi, the Ashanti Regional capital.

This second demonstration just like the maiden one in Accra, has been necessitated by the excruciating hardship confronting the average Ghanaian citizen occasioned by the imposition of draconian taxes, high cost of petroleum products, skyrocketing inflation, the free fall of the national currency, the Cedi [and] high level of unemployment amongst the youth”, Mr. Mornarh emphasised.

It will be recalled that on Tuesday June 28, members of Arise Ghana poured unto the streets of Accra to register their displeasure with the state of affairs in the country.

But what started as a coordinated protest soon degenerated into chaos; with the Police firing tear gas into the crowd.

According to the Police, this was in reaction to some errant protesters who were bent on using unapproved routes.

The Police were also pelted by some protesters who accused the personnel of deliberately obstructing the flow of activities.

This led to some police officers sustaining injuries, with some protesters being wounded as well.

Following the violent exchanges, the Ghana Police Service condemned the developments and commenced investigations into the incidents.