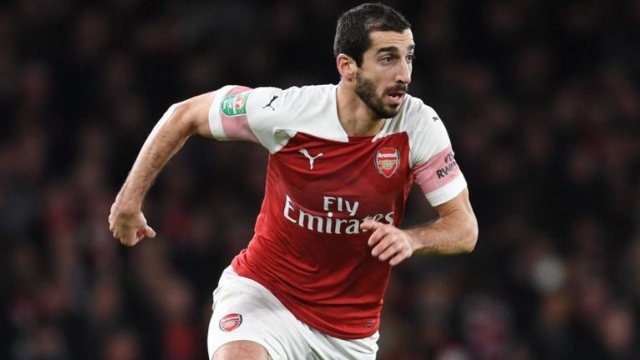 Arsenal midfielder Henrikh Mkhitaryan will not play in the Europa League final against Chelsea on 29 May.

It is understood the Armenian, 30, feared for his safety on the pitch in Baku, Azerbaijan.

“Having considered all current options, we had to take the tough decision for me not to travel with the squad to the Europa League final,” said Mkhitaryan.

“It’s the kind of game that doesn’t come along very often and I admit, it hurts a lot to miss it.”

As a result of political tensions between Azerbaijan and Armenia, Mkhitaryan has missed club matches played in Azerbaijan in the past.

“We have written to Uefa expressing our deep concerns about this situation,” read an Arsenal statement.

“We have thoroughly explored all the options for Micki to be part of the squad but after discussing this with Micki and his family we have collectively agreed he will not be in our travelling party.

“Micki has been a key player in our run to the final so this is a big loss for us from a team perspective.

“We’re also very sad that a player will miss out on a major European final in circumstances such as this, as it is something that comes along very rarely in a footballer’s career.”

Uefa responded to Arsenal with a statement that said: “Working alongside Arsenal FC, Uefa sought and received assurances regarding the player’s safety in Azerbaijan from the highest authorities in the country.

“As a result of these guarantees, a comprehensive security plan was developed and given to the club.

“While the club acknowledges the efforts that Uefa and the Azeri government have gone to in this matter, we respect the personal decision not to travel with the player.”

Arsenal, who finished fifth in the Premier League, will qualify for next season’s Champions League if they beat Chelsea.

It would be their first European trophy since they won the Cup Winners’ Cup in 1994.

On Monday, Azerbaijan’s ambassador to the UK, Tahir Taghizadeh, said there was no cause for concern.

“I would say [to Mkhitaryan] ‘you are a professional athlete, you are a footballer, and a class A footballer’, so let’s make sure this is a class A event if our purpose is to make a great final,” Taghizadeh told Sky Sports.

“If our purpose is to play political games around it, that is something different, but I hope it is not, because you [Mkhitaryan] are being paid as a footballer, not as a politician, so let’s leave other issues aside.”

There are no diplomatic relations between Armenia and Azerbaijan because of a longstanding conflict over the disputed Nagorno-Karabakh region. Azerbaijan usually does not allow foreign nationals of Armenian descent to enter the country.

While playing for Borussia Dortmund in 2015, Mkhitaryan did not travel for a Europa League tie against Azerbaijan Premier League side Gabala because of security concerns.

He also missed Arsenal’s 3-0 Europa League win at FK Qarabag in October, with manager Unai Emery saying “he cannot travel here” despite Uefa offering their support over a visa application.

Armenian media reported that Anna Naghdalyan, a spokesperson for the Ministry of Foreign Affairs of Armenia, said Azerbaijan had an “opportunity to show how real it is to prepare the people for peace”.

“Manifestations of racism and xenophobia in sport should not take place,” added Naghdalyan.

“In this regard, the refusal of Azerbaijan to provide such guarantees and a ban on the entry of alleged fans of Armenian origin is nothing but a new manifestation of racism, and this calls into question the holding of similar international events in Azerbaijan.”