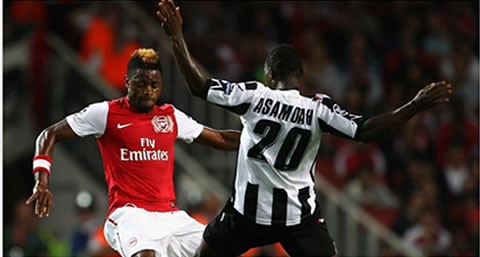 One of the best players in a generation of top-drawer Ghanaian talent, Udinese’s Kwadwo Asamoah has been a consistent force for club and country since emerging on the world stage at the start of 2010. In that year, the Accra native played every match for the Black Stars as they marched to the final of the CAF Africa Cup of Nations and then narrowly missed being the first African side to reach the semi-finals of the FIFA World Cup™.

In a team positively bursting with midfield players, the 23-year-old proved to have a lethal combination of strength, pace, technique and vision, and he was voted the Most Promising Talent on the continent by its international coaches. Asamoah built on that success in 2011, playing a major a role in Udinese unexpectedly finished third in Serie A, which has reportedly put him on the radar of Europe’s biggest clubs, including Manchester United.

With I Zebrette just two points off the pace in the Scudetto race and Ghana set to enter the CAF Africa Cup of Nations among the favourites for glory, FIFA.com caught up with the 23-year-old to discuss those competitions, his nation’s quarter-final elimination at South Africa 2010, the road to Brazil 2014 and life in Italy.

FIFA.com: Kwadwo, Udinese sold several key players in the summer but have made a strong start in Serie A and the UEFA Europa League. What will it take for the club to compete with the big teams in Europe consistently?

Kwadwo Asamoah: Last year we worked hard and deserved the chance to play important matches. These games against high-level opponents boost the prestige of our club, and it is an opportunity we should not miss. We always strive to do our best.

What has been the key to the club’s success?
Our young age and mentality. We are one of the teams with the lowest average age in the Serie A. We help each other a lot on the pitch, and the group is very united. Our mentality is the same as a year ago, even though several new players have arrived.

You have been playing further back in the midfield for Udinese. Has that made a big difference to your game?
I do notice a difference between the national team and the Italian league. With Ghana, I play behind the only striker, Asamoah Gyan, while in Udine I learnt to play as a left midfielder and help more in all parts of the pitch. I even happened to play in defence.

How strong will Ghana be at the upcoming Cup Nations Cup?
We are a good team, without any phenomenons but with many quality players. If we are compact and gritty as [coach Goran] Stevanovic asks, we will be dangerous for anyone to play.

Do you think the absence of teams like Egypt, Cameroon and Nigeria will make it an easier competition to win than previously?
It is true that strong and successful teams will be missing, but it still won’t be easy to win the continental tournament. Not even South Africa will be there, but there are always new teams who will make life hard for anyone. All the teams who qualified for the finals deserved it.

Who do you see as the favourites? Can one of the smaller teams make a big surprise?
I do not see any favourite. We all start on the same level, so of course there could be a big surprise. I see a very balanced tournament.

What do you think about the Brazil 2014 qualifying draw? Who is you main opposition from Sudan, Zambia and Lesotho?
It is not a difficult group. Zambia are certainly the opponents to fear most.

How long did the disappointment of losing on penalties in the South Africa 2010 quarter-finals last?
Football is like that. There are bad moments and defeats to be swallowed. The good thing is that you always have a chance to come back. We got within a step of the semis, and in the last minute we missed a penalty that would have allowed us to make history, but it can happen. We hope to have a chance to overcome it in the next World Cup. I would like to have such an opportunity. Obviously we were very sad, but in the end it is a football game.

How do you enjoy life in Italy?
I like living here. I have been in Udine for four years, and I am truly happy to live in such a pleasant place. I fit in completely.

After several years in that country, do you consider yourself as a Ghanaian-Italian?
I am a Ghanaian and my nationality does not change, but I am very happy to live in Italy.

Have you adopted the Italian foods already? Do you choose pasta over fufu now?
I always eat Italian food. When I can, I do not give up fufu, but I must say I prefer pasta or rice.