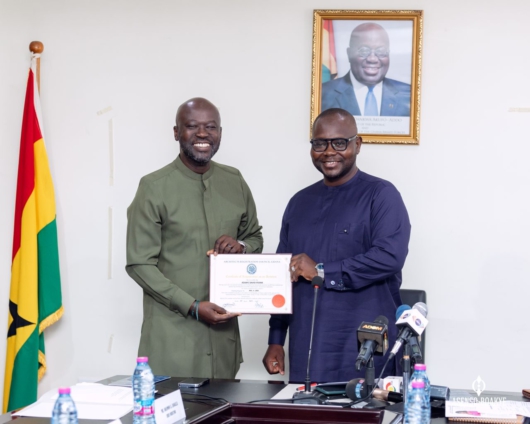 The Minister for Works and Housing, Francis Asenso-Boakye (MP) has inducted Sir David Adjaye OBE, one of the world’s most celebrated architect as a registered license member of the Architect Registration Council (ARC) to legally practice in Ghana.

The long-awaited induction ceremony happened on Monday after the ARC, the regulatory body for the architectural profession, completed the processes per its mandate, to ensure that the global icon in the architectural industry can practice as a licensed architect in the country.

In his remarks, Asenso-Boakye said Sir Adjaye’s admission into the licensed Architects Register of the ARC will guarantee the required worldwide networking benefit in both theory and practice to other registered members within the architectural industry.

With his acclaimed reputation as a result of his uncompromising stand on high design standards in the architectural space, Asenso-Boakye expressed belief that Sir Adjaye’s licensed membership of ARC will be another feather in the cup of the Council, whose obligation is to deliver standards and services that demonstrate and reinforce architecture as a noble profession within the building and construction industry.

The Sector Minister therefore urged professionals in the country’s-built environment of the need to explore and change the status quo by coming out with innovative design proposals that solve challenges, especially within the affordable housing space, adding that architecture has the potential of being used as a catalyst to overturn the economic fortunes of the country as evident in almost all advanced countries and emerging economies.

Having received the annual practicing certificate for 2022, the Board Chairman of the ARC, Arc. Richard Nii Dadey congratulated Sir David Adjaye for fulfilling all requirements for the issuance of a practicing license in Ghana, and admission on to the standing register in conformity with the Architects Act 357.

The Board Chairman expressed optimism about the inductee’s ability to use innovation to improve the environment and lives as well as respond to future inevitable challenges within the architectural industry.

In his response, Sir David Adjaye expressed his gratitude for being conferred with the honour to practice in his home country. He was hopeful that his admission as a certified practitioner in Ghana will inspire the new generation in the architectural space in the country.

The inductee with his firm, Adjaye & Associates, is globally known for his innovative and complex architectural masterpieces all over the world, including the National Museum of African American History and Culture in Washington, DC, USA, which has won several architectural awards, including Ruby City/Linda Pace Galley in San Antonio, Texas, USA; the 130 William Street Tower in New York, USA, which is under construction; the Holocaust Memorial in London, United Kingdom; the Hallmark Tower in Johannesburg; the World Bank Headquarters, Dakar, Senegal; Alara in Lagos, Nigeria, and the Hugh Masekela Pavilion in South Africa and the ongoing National Cathedral in Accra.