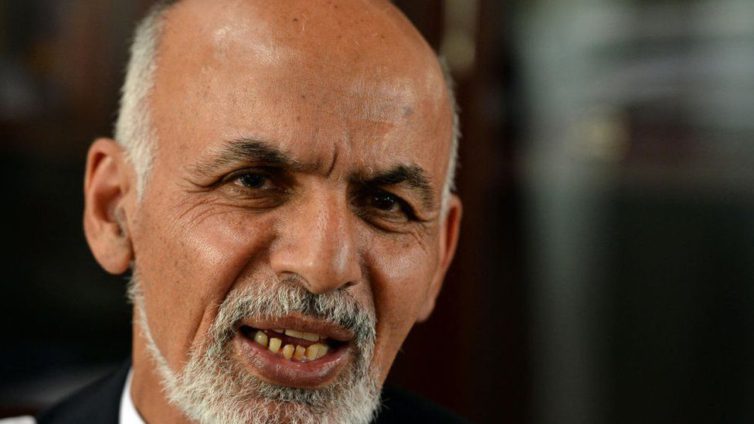 Mr Ghani was heavily criticised and accused of abandoning the country

Afghanistan’s former president has defended his decision to flee the country as the Taliban closed in earlier this year, saying he did it to prevent the destruction of Kabul.

The Taliban seized power in August after taking control of the capital.

Ashraf Ghani revealed that when he woke up on 15 August he had “no inkling” it would be his last day in Afghanistan.

It was only when his plane left Kabul that he realised he was going, Mr Ghani said on BBC Radio 4’s Today programme.

He was heavily criticised and accused of abandoning the country at the time. He is now in the United Arab Emirates.

Mr Ghani made the comments in conversation with Gen Sir Nick Carter, the UK’s former Chief of the Defence Staff, who was guest-editing the Today programme on Thursday.

As the day started, Mr Ghani recalled, Taliban fighters had agreed not to enter Kabul – “but two hours later, this was not the case”.

“Two different factions of the Taliban were closing in from two different directions,” Mr Ghani explained. “And the possibility of a massive conflict between them that would destroy the city of five million and bring havoc to the people was enormous.”

He agreed to let his national security adviser and wife leave Kabul, then waited for a car to take him to the ministry of defence.

The car never came. Instead, the “terrified” chief of presidential security came to him to say that if Mr Ghani took a stand, “they will all be killed”.

“He did not give me more than two minutes,” Mr Ghani said. “My instructions had been to prepare for departure for [the city of] Khost. He told me that Khost had fallen and so had Jalalabad.

“I did not know where we will go. Only when we took off, it became clear that we were leaving [Afghanistan]. So this really was sudden.”

In the wake of his departure, Mr Ghani was roundly criticised by many in Afghanistan including his vice-president Amrullah Saleh, who called it “disgraceful”.

Allegations that Mr Ghani had taken vast amounts of money also emerged – something he emphatically denied, welcoming an international investigation that he said would clear his name.

“I want to categorically state, I did not take any money out of the country,” he said, adding: “My style of life is known to everyone. What would I do with money?”

Mr Ghani acknowledged mistakes were made, including “assuming that the patience of the international community would last”.

However, he pointed to the agreement made between the Taliban and the US under then-President Donald Trump, which paved the way for the events leading to 15 August.

“Instead of a peace process, we got a withdrawal process,” Mr Ghani said. The way the deal was done, Mr Ghani added, “erased us”.

Under the terms of the deal, the US agreed to reduce its forces and those of its allies, as well as providing for a prisoner swap – after which the militant group agreed to talks with the Afghan government.

The talks did not work: by summer 2021, with US President Joe Biden promising to withdraw the last troops by 11 September, the Taliban were sweeping across Afghanistan, taking city after city.

What happened in the end, Mr Ghani said, was “a violent coup, not a political agreement, or a political process where the people have been involved”.

The same day Mr Ghani left Kabul, the Taliban took control. Since then, the country has been thrown into an humanitarian and economic crisis, made worse by the removal of international support after the group seized power.

Three months on, Mr Ghani says he is willing to take the blame for some things which led to the fall of Kabul – like trusting “in our international partnership”.

However, he added: “My life work has been destroyed. My values had been trampled on. And I have been made a scapegoat.”