At least 44 killed after stampede at religious bonfire festival - MyJoyOnline.com

At least 44 killed after stampede at religious bonfire festival 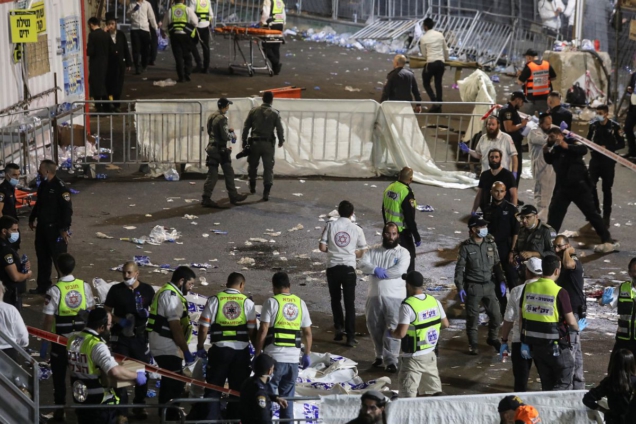 At least 44 people have been killed after a stampede at a religious bonfire festival in Israel, rescue officials have said.

Dozens more were hurt at the Lag B’Omer event in northern Mount Meron, where annual commemorations including all-night prayer and dance were taking place.

Footage on social media showed chaotic scenes as men clambered through gaps in sheets of torn corrugated iron as they tried to escape the crush.

“Masses of people were pushed into the same corner and a vortex was created,” witness Dvir told Army radio.

(1/2) MDA Spokesperson: at 00:50 a report was received at the MDA 101 Emergency Call center for bleachers which nun collapsed at Har Meron. MDA EMTs and Paramedics are on scene treating tens of injured including those who are in critical condition. An update will follow as needed pic.twitter.com/OmU3KCzhha

Zaki Heller, a spokesman for the Magen David Adom ambulance service, said 150 people had been taken to hospital, including six in a critical condition.

“In one moment, we went from a happy event to an immense tragedy,” he added.

Photographs showed rows of wrapped bodies lying on the ground, and dozens of ambulances.

“Close to 200 life-saving vehicles” were sent to the scene, ambulance service spokesman Yoni Yagodozsky told Sky News, in addition to a “huge fleet” that was already there.

Mr Yagodozsky said the tragedy happened in the hilly area when “people were on their way down from the main ceremony”.

The path was narrow and “people tripped over”, while those behind “simply walked on them and that’s what created this horrible, horrible incident”, he said.

There will be a “thorough investigation” following the “huge tragedy”, Mr Yagodozsky added.

Funerals are expected to happen today.

About 100,000 ultra-Orthodox Jews had gathered at the tomb of second-century sage Rabbi Shimon Bar Yochai, considered to be one of the holiest sites in the Jewish world.

It was the first large-scale religious festival held since almost all Israel’s coronavirus restrictions were lifted. In previous years, up to a quarter of million people have gathered.

Magen David Adom said it would “not give up until the last victim is evacuated”.

The site is mostly gender-segregated and mobile-phone video suggests the crush took place mainly in the men’s areas.

Prime Minister Benjamin Netanyahu described the incident as a “heavy disaster”, adding: “We are all praying for the wellbeing of the casualties.”

Police have shut down the site and ordered attendees to be evacuated by bus.

One witness told the Army Radio station that he felt like he was about to die – and said “masses of people were pushed into the same corner and a vortex was created”.

He said a first row of people fell down, and then a second row, where he was standing, also began to fall down from the pressure of the stampede.

The cause of the crush is not clear, with an ambulance spokesman saying the night went from a “happy event” to “immense tragedy” in a matter of minutes.

Yoni Yagodozsky, a spokesman for Israel’s emergency services, said mobile intensive care units and helicopters were used to transport the most seriously injured to hospital.

He told Sky News that first responders were “well trained and well prepared” for these types of events, and had actually completed an exercise anticipating such a scenario.

“In the beginning, there was concern that one of the construction sets built in the area had collapsed. Then, it became more and more clear that people were trying to escape,” he said.

The gathering had been held despite health officials warning that crowding could cause Covid-19 to spread.

Israel has seen cases plummet since launching one of the world’s most successful vaccination campaigns late last year.