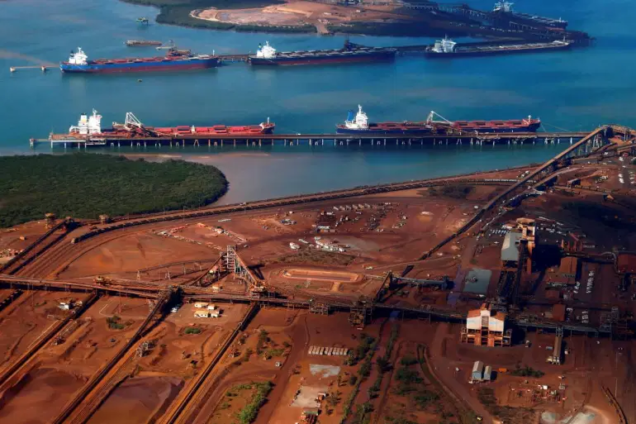 Port Hedland, located on the coast of Western Australia, is one of the world's largest iron ore loading ports [File: David Gray/Reuters]

Australian soldiers are being deployed to Port Hedland, one of the world’s largest iron ore loading ports, to help contain a coronavirus outbreak on a bulk carrier that last changed crews in the seafaring city of Manila.

Seventeen of the 21-crew members on the ship have tested positive for the virus, ship owner Oldendorff Carriers said in a statement.

Ten of those confirmed with the virus have been moved to hotel quarantine while seven remain on board as part of an 11-person crew, authorities said.

Oldendorff said that the Manila crew change on September 5 complied with all protocols.

The statement neither mentioned the nationalities of the crew members with the virus, nor how many of the vessel’s staff are from the Philippines.

“All crew members tested negative for the virus before leaving the Philippines,” Oldendorff said.

The ship, which was scheduled to collect manganese ore which is used in steel production, is anchored off Port Hedland on the coast of Western Australia.

The sparsely populated state contained the virus early in the pandemic by closing its international and domestic borders. It now bars cruise ship arrivals but allows export carriers and limited international air arrivals in conjunction with a mandatory 14-day quarantine.

Up to 10 Australian Defence Force (ADF) personnel were expected to be deployed to Port Hedland after a request for assistance from the state government, an ADF spokesman said in a statement.

Australia’s coronavirus hotspot state of Victoria on Tuesday reported 10 new cases in the past 24 hours, turning around a second wave that only last month was infecting more than 700 people every day.

The country’s second most populous state placed nearly five million residents of Melbourne, the state capital, under a stringent lockdown and curfew in early August, which it only began to lift on Sunday.

“That continuous improvement will serve us well as we continue to open up,” Premier Daniel Andrews told reporters on Tuesday.

“This strategy is working (and) is delivering us those lower numbers.”

Meanwhile, in neighbouring New South Wales, Premier Gladys Berejiklian said on Tuesday it was a “significant day again” after the state recorded zero local coronavirus cases for the fourth day in a row.

Two cases were reported under hotel quarantine over the last 24 hours.

“In the absence of a vaccine, we may have to live this way for years,” he said.

Australia has reported more than 27,000 cases and 882 deaths from the virus, many in care homes for the elderly.

Morrison also said that as the country looks to reopen its international borders to select countries with low COVID-19 cases, individuals arriving in Australia could be allowed to quarantine at home instead of staying at hotels for two weeks.

“We do look … to have our borders open up at some point to safe locations, whether it be New Zealand or parts of the Pacific, or places like South Korea or Japan, or countries that have had a much higher rate of success, then there are opportunities to look at those alternative methods,” he said.

DISCLAIMER: The Views, Comments, Opinions, Contributions and Statements made by Readers and Contributors on this platform do not necessarily represent the views or policy of Multimedia Group Limited.
Tags:
Australia
Coronavirus
New Zealand
Port Hedland