A Belgian farmer says animal rights activists who targeted his farm have caused the deaths of 500 ducks.

Filip Callemeyn told the BBC that 183 ducks died from stress because of the protest and another 300 had to be put down on Tuesday.

The activists insist they were not to blame for the death of the animals.

The 40 protesters were demanding the closure of the farm, which produces duck foie gras, at Bekegem in West Flanders.

The farm is already slated to shut down by 2023.

Foie gras production involves force-feeding caged birds in order to deposit large amounts of fat in the animals’ liver, for the taste it produces. Animal rights groups say the practice is inhumane.

Production of foie gras is already banned in several European countries and authorities in Flanders have declared a ban on the forced feeding of animals by the end of 2023.

What the activists did

The activists, from a group called Animal Resistance, entered the farm on Saturday and glued themselves to the cages before police arrived. In a statement filmed beside the duck cages, they said the ducks were struggling to breathe and were living under stress and hurting each other.

The whole action lasted more than six hours as police had to bring a team in to unglue the activists. 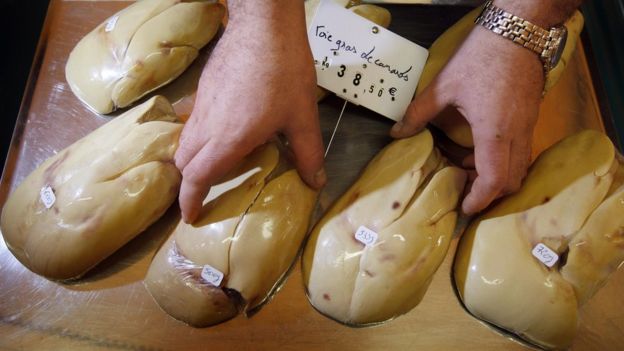 Mr Callemeyn said the whole farm had been shocked by the arrival of the activists. The deaths of 500 ducks in one barn would hit his farm in the short term, he said, but he had another 10,000 elsewhere.

Animal Resistance said it rejected all responsibility for the deaths.

“The animals were already ill and were being kept in dreadful conditions. We acted calmly and were accompanied by a vet,” the group said in a statement.

The farm in Bekegem is due to be shut down by 2023, but the protesters said the closure date was not early enough.

“That’s 500,000 ducks more that will be treated like this, and we want this farm shut down as soon as possible,” spokesman Glenn Lemmens said.

On Sunday, 14 people were arrested when they entered an Antwerp supermarket to protest against the farm’s products being on sale there.

Foie gras is still popular in France. The main French foie gras association, Cifog says France produces 20,000 tonnes a year and exports a quarter of that.

Farmers say they can produce foie gras without causing stress and argue that force-feeding lasts only a short time before the animals reach maturity, but leading animal rights groups say the practice violates animal rights.

The product was banned in the US state of California in 2012.