Ayanna Pressley is set to become the first African-American woman elected to the US Congress in Massachusetts, following a primary upset.

She will not face a Republican opponent in November's mid-term election.

It is the latest in a series of victories for progressive, young and minority candidates representing the opposition party.

2018 has also seen a historic amount of female candidates run for Democratic nominations.

In a speech after her win, Ms Pressley said: "Change is coming and the future belongs to all of us."

She also referred to President Donald Trump as "a racist, misogynist, truly empathy bankrupt man" and hit out at wealth inequality in her seventh congressional district.

It is the only district in her state to have a majority non-white population.

An emotional video of her finding out she had won has been shared thousands of times online.

Her 66-year-old opponent has represented the district for two decades, and had not faced a primary challenger since he first won the nomination in 1998.

Conceding on Tuesday, Mr Capuano said: "Clearly the district wanted a lot of change. But so be it, that's the way life goes." 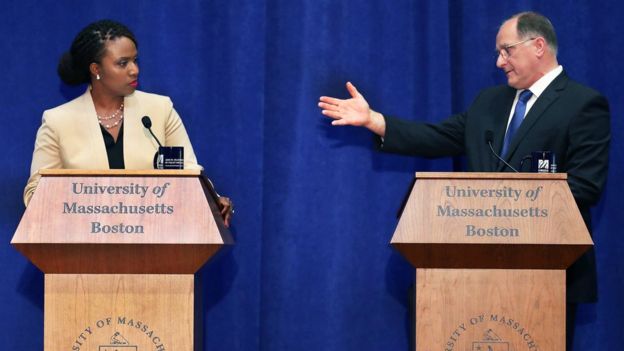 Both he and Ms Pressley are seen as progressives – but she advocated for a more "activist" style of leadership.

She also supports measures deemed radical by many, including abolishing Immigration and Customs Enforcement (ICE), a federal agency that has enforced President Trump's crackdown on illegal migrants.

Before becoming a councillor she worked for Senator John Kerry and Rep. Joseph Kennedy II – whose uncle, John F Kennedy held the seat Ms Pressley is set to win before he became president.

Ms Ocasio-Cortez congratulated Ms Pressley on Twitter and said the two had bonded over having people doubt their capability and experience.

Elsewhere in the state, Congressmen Joe Kennedy, 37, won a comfortable victory in his primary and fellow Democrat Richard Neal, 69, fended off a younger challenger.

Political analysts predict all nine of the state's House seats will remain Democratic in the November vote.