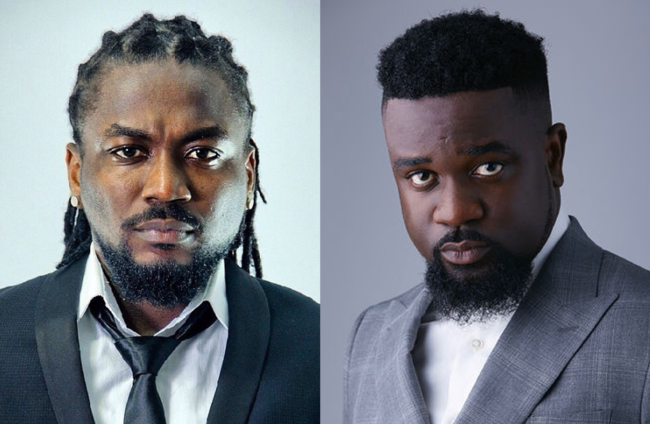 There has been some misunderstanding between reggae/dancehall artiste Samini and rapper Sarkodie over collaborations.

The feud between the duo has generated mixed reactions on Twitter after Samini revealed that he was no more interested in collaborating with Sarkodie.

Samini and Sarkodie collaborated in 2014 to release the hit song ‘Love Rocks’.

But nearly a decade on, there appears to be some bad blood between the two artistes, at least from Samini’s perspective.

This comes after fans of the dancehall artiste asked on the micro-blogging site when they should be expecting a collaboration with Sarkodie.

Samini’s response was one that many did not expect.

“Not sure I’ll need a verse from Sark but if he ever does need one I’m not interested and that’s facts. He knows this himself.. )y3 Alo sometimes and I don’t play that.”

Not sure I’ll need a verse from sark but if he ever does need one I’m not interested and that’s facts. He knows this himself. 😂😂😂. )y3 Alo sometimes and I don’t play that. Yes or no be problem for am so e go slow you and your project go dull …, he did it to me on burning EP https://t.co/x0pAKrvc7h

On his Twitter page, the dancehall artiste said the ‘No Pressure’ crooner’s supposed reluctance to give a concrete response to requests for features affected his 2021 Burning EP.

“Yes or no be problem for am so e go slow you and your project go dull …, he did it to me on burning EP,” he replied.

However, Samini who spoke on HitzFM DayBreakHitz Tuesday with Andy Dosty, gave a blow by blow account of why he is not interested in collaborating with Sarkodie again.

Samini explained that Sarkodie on his side, never responded to his text whenever he sends a message. He said that after everything he did for the rapper, he was expecting the same thing from him.

“If you message Sark, he will not respond. I heard Kwaw Kese also complained about that so I thought that’s the way he is, no problem. He’s not my friend like that and he will attest to that. We don’t talk, we don’t call each other so there’s no reason to have a beef, nothing.

“But my thing here is that, when I did everything that he ever asked me to do in time and on time, I expected that he will know that my principles towards work is such that if you can do it, let me know you can, if you can’t cool”.

The dancehall artiste continued that Sarkodie sometime back expressed his interest to do a remix on his hit song ‘My Own’ with the original beat but preferred to use a remix beat. He said that might have got him furious because of what he did.

“He expressed interest in ‘My Own’ remix, so I sent him the original beat [reggae beat], he did his verse, he sent the files and I put the files on a remix beat. Obviously, he wanted to be on the original beat but I thought that will distort the history of the track because I had the original track which is me by myself and that’s how it was a hit.

“So if a remix is an interest, let’s put it out but let’s put it out as a remix. I don’t think it went down too well with him because he would have loved to be on the original track”, he said.

Samini narrating his faustrations to Andy Dosty asserted that his hopes were high for any collaboration and track he wanted to do with Sarkodie but he was ignored.

“I told him this is the very last track, he’s like cool and then fast forward down the line, Sark never responded, he never said anything about the song, he never did the song. Anytime I ask whatsapp, it’s a blue tick, I even sent him an invitation to the listening of my EP, he read it and was blue tick. I don’t take it too personal but I know that is how he rolls.

The dancehall artiste further explained that due to this issues with Sarkodie, he is not expecting to do a track with the rapper.

He, however, said Sarkodie will end up delaying him if he seeks to collaborate or needs a verse from him.

Samini continued saying he does not need a verse from any artiste to make a hit song.

“Luckily for me, I don’t need anybody’s verse or corous to make a hit song or replace my catalogue. The only song I have on my catalogue that’s a hit song featuring someone else is Wizkid’s ‘Timebomb’,”.

DISCLAIMER: The Views, Comments, Opinions, Contributions and Statements made by Readers and Contributors on this platform do not necessarily represent the views or policy of Multimedia Group Limited.
Tags:
Samini
Sarkodie