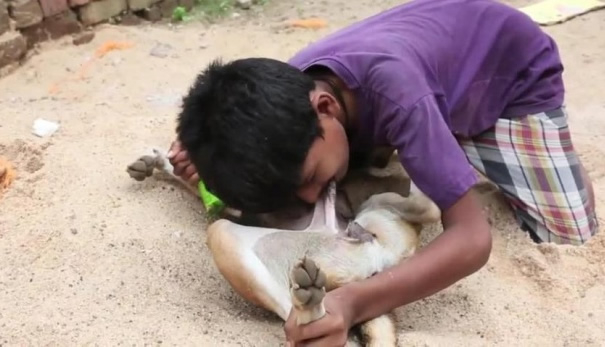 Meet Mohit Kumar, a 10-year-old boy from Manaitand, India, who has been feasting on dog milk ever since he was four.

His parents are desperate to get him to stop sucking the milk of stray bitches in their town, but so far they’ve been unable to find a way.

Mohit was weaned at two years, but at the age of four he developed a rather strange habit – sucking the milk of stray bitches. “Once Mohit was playing with stray dogs outside and happened to suck on the breasts of a bitch. Since then he does the same whenever he gets a chance to do so,” his mother Pinky says.

“Bitches of the area have also taken a liking to him and feed him whenever Mohit wants them to.” His worried parents don’t even allow the boy to go outside without supervision, for fear that he will seek out stray bitches to get his milk fix, but he sometimes gives them the slip. “We do not even allow him to go to school fearing that this habit may only get worse,” Pinky adds.

Most of the female dogs in Manaitand know Mohit and let him suck on their breasts, but the boy did get in some trouble recently when a a bitch from another colony bit him. His parents had to take him to Patliputra Medical College Hospital (PMCH) for treatment, and he is now taking vaccine to avoid rabies, but they have no way of preventing this from happening in the future, as Mohit’s craving for dog milk seems insatiable.

The fact that Mohit was born mute makes matters even more complicated for his parents, who have trouble understanding what makes dog milk so appealing to him. Sometimes he runs off, and it’s only after neighbors come to complain about him sucking on the breasts of strays in the streets that they that his family learns what he was up to.