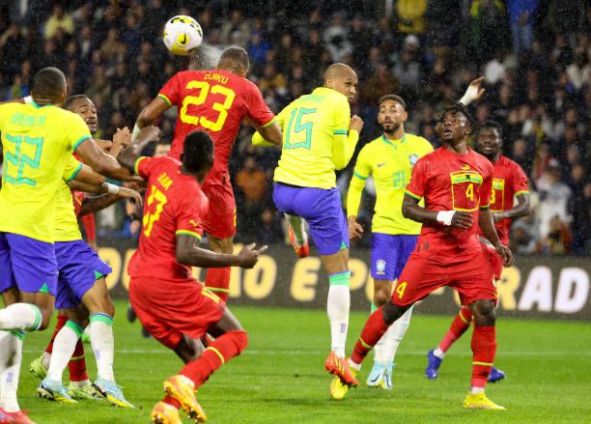 Ghana succumbed to a 3-0 defeat to Brazil in a pre-World Cup friendly on Friday at the Stade Océane in Le Havre, France.

All three goals came in the first half with Richarlison grabbing a brace after Marquinhos had given the Seleção an early lead.

An area of concern for the Black Stars was the fact that they conceded two goals from set pieces and in all honesty, the tally could have been more.

This follows a trend set by African teams in the 2018 edition of the World Cup. During the tournament in Russia, 22 goals were scored from corner kicks. Out of that total, African countries conceded 8 which was the highest by any continent at the Mundial.

As a result, no African team qualified out of their groups with Egypt, Morocco, Tunisia, Nigeria, and Senegal all crashing out – the first time that had occurred at the global showpiece since 1982.

Considering how tight the margins are at the World stage, set pieces have proven to be a useful tool for various international teams.

Extensive research on the 2018 World Cup showed that out of 600 corners taken, 22 of those were scored.

A further breakdown reveals teams conceded more when they opted for zonal marking instead of mixed marking. The former led to 6% of goals from corner kicks conceded whilst the latter resulted in 3.7%.

There is also a relationship between the type of corner and how successful it is. 4.6% of the corners that led to goals were inswinging whilst outswinging contributed to 3.1% of the goals.

Also, 17 of the 22 goals scored from corners saw the defending team place no players on the line. However, this is a new development we are seeing a lot more teams deploy now in order to ensure the keeper has room to operate and also to put the attacking team at risk of offside after potential rebounds.

With regards to which zones attacking teams usually scored their corners from, the center was prevalent as it resulted in 7% of the goals. The next highest was the first post which contributed to 3.5% of goals from corner kicks.

Now with all this in mind, let’s take a look at the set-piece scenarios that saw the Black Stars fall short.

Brazil had turned up the heat and were creating tons and spaces and good situations. However, for all their good work in open play, it took a corner to finally open their account in the 9th minute.

Even with Neymar, one of the world’s best set piece takers on the pitch, Brazil still opted for the left foot of Raphinha. Why? Remember the 2018 World Cup corner data suggests an inswinging corner increases your chances of scoring as compared to an outswinging one.

Ghana also had a role to play defensively and despite data suggesting that zonal marking increases your chances of conceding from a corner, the Black Stars still opted for that.

With the zonal marking, Marquinhos and a host of other Brazillian players had a clean run-in to meet the inswinging cross.

The cross went straight to the central area which was deemed as the most prolific zone from the 2018 World Cup and of course, Marquinhos scored.

Although Richarlison’s goal wasn’t from a corner kick, it was from a set piece close to the corner, and the same principles from the 2018 World Cup can be applied.

Neymar who is a right-footer stands behind the ball this time to achieve the same inswinging effect.

Ghana once again chooses to mark zones as Brazillian players lineup in a cluster amongst themselves. The moment Neymar delivers the ball something interesting happens.

The South Americans split up as Richarlison and Marquinhos make the near-post run. The Spurs forward gets there first and makes it 3-0. The second most prolific area from corners was the first post and Brazil took advantage of that and applied it to a free-kick.

Throughout the game, Brazil on a number of occasions threatened from corner kicks – mostly repeating these same principles. This shows the amount of work that has gone into their set-piece training.

Minutes after making it 3-0, Brazil attempted another inswinging corner with a near post run. Everything went right till the execution which saw the header mistimed.

Late in the game, Brazil switched it up a bit and went back to the center. Once again, everything looked good till Gleison Bremer had his header blocked.

Brazil created another opportunity from a corner minutes later only for a block from Mohammed Salisu to prevent the South Americans from increasing their lead.

There is time to learn

Pictures from the official Black Stars account showed that the team worked on set pieces in training during the week. But as the evidence suggests, there is still a lot of work to be done defensively.

Out of the eight corner kicks Brazil had on Friday, six of the deliveries found a South American. There are underlying issues that have to be tackled in terms of the approach and execution when defending set pieces.

Ghana finds itself in a group with Portugal and Uruguay who have a history of scoring from set pieces. A goal can make a difference on the global stage and in order to stand a chance the Black Stars will need to demonstrate they can withstand something as inevitable as set pieces.

There are still almost two months left till the World Cup and Otto Addo will have more friendlies to test his side but they can’t afford to repeat the same mistakes of African teams four years ago in Russia.

DISCLAIMER: The Views, Comments, Opinions, Contributions and Statements made by Readers and Contributors on this platform do not necessarily represent the views or policy of Multimedia Group Limited.
Tags:
Black Stars
Brazil
Ghana
Owuraku Ampofo
Qatar 2022 World Cup
World Cup