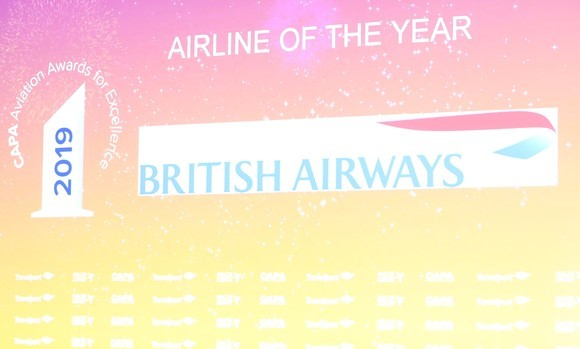 British Airways has been named Airline of the Year at one of the aviation industry’s most prestigious award ceremonies.

CAPA – Centre for Aviation, is one of the world’s most trusted sources of market intelligence for the aviation and travel industry.

Judges awarded British Airways the headline title of the night in recognition of its continuing commitment to innovation, investment in new aircraft, renewal of its existing cabins so that they look and feel new, its new and redesigned lounges, new dining across all cabins, new bedding and amenity kits, industry-leading, streaming onboard WiFi and access to power at every aircraft seat.

Speaking at the event, CAPA Chairman Emeritus Peter Harbison said, “British Airways was famously the world’s favourite airline in the 1990s and it has taken some tough decisions to maintain its market position against increasing competition.”

He added, “Under the leadership of CEO and Chairman Alex Cruz, British Airways has not been afraid to adopt new ticketing practices, service levels and is now among the frontrunners of distribution change and technology adoption – at the same time as achieving an industry-leading ROIC. It is certainly “100 not out” for one of the world’s most famous airline brands.”

British Airways’ Chairman and CEO Alex Cruz said: “On behalf of everyone at British Airways, we are truly honoured to accept this award. In this, our centenary year, we have much to celebrate from our past and much to look forward to for the future.”

Mr Cruz added, “We pioneered the first commercial passenger flight as Air Transport and Travel Limited starting with just one route to Paris. Since then, we have lead from the front, introducing innovative products such as the first lie-flat Business Class seat, operating the first jet-engine aircraft across the Atlantic, and flying customers at twice the speed of sound on Concorde.

“We’re now transforming British Airways so we are fit for the future. We are investing £6.5 billion in new, more efficient aircraft, introducing new products, innovating with technology and we are committed to net zero emissions by 2050. British Airways has a proud history of taking Britain to the world and bringing the world to Britain, and that is set to continue for years to come.”