Brittney Griner lands in US after prisoner swap with Russia 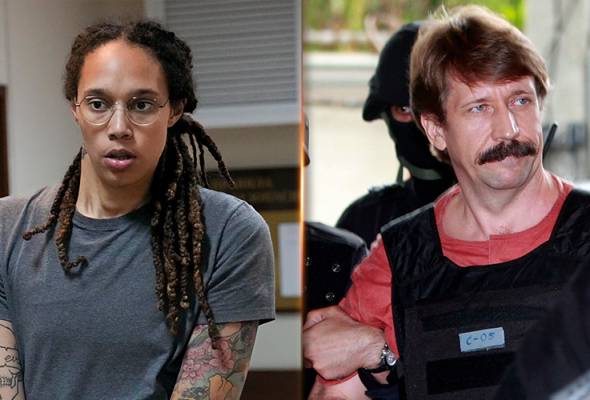 Ten months after she left the US to play basketball in Russia, WNBA star Brittney Griner has landed in her home state of Texas.

Griner was jailed for carrying cannabis oil at a Moscow airport in February, and was exchanged for Russian arms dealer Viktor Bout on Thursday.

The pair were seen crossing on the tarmac at Abu Dhabi airport.

President Joe Biden said Griner was “in good spirits” and needed “time and space to recover”.

She was flown to San Antonio, near her hometown of Houston, where she will be offered medical care after her time in a Russian penal colony.

Her wife, Cherelle Griner, who attended Mr Biden’s announcement at the White House on Thursday, was expected to meet her there.

“Brittney has had to endure an unimaginable situation and we’re thrilled that she is on her way home to her family and friends,” NBA commissioner Adam Silver said in a statement about her return.

She is one of the best-known sportswomen in America. During the US basketball season the double Olympic champion was a star centre for Phoenix Mercury in the WNBA.

Her reason for flying to Moscow was to play in Russia during the off-season in the US. During her trial in Russia, she said the cannabis oil found in her bag had been an “honest mistake”.

The Biden administration proposed a prisoner exchange in July, aware that Moscow had long sought the release of Bout, a convicted arms trafficker known as the Merchant of Death. He has been held in an American prison for 12 years.

Footage on Russian state media showed them crossing on the tarmac with their respective teams. In the video, apparently provided by Russian security services, Bout was warmly greeted by two Russian officials as Griner, who is 6ft 9in (206cm), looks on. Part of the swap was then edited out, before showing the two parties going their separate ways.

“The Russian citizen has been returned to his homeland,” the Moscow foreign ministry said in a statement.

Live television in Russia showed Bout arriving in Moscow. Pictures showed him hugging his mother and wife at the airport tarmac.

“I made it. That’s the main thing,” he told reporters at the airport.

“In the middle of the night they simply woke me up and said ‘Get your things together,'” he added.

Griner, who turned 32 in October, will be welcomed in Houston with a light show, the city’s Mayor Sylvester Turner said.

It is unclear how long she will remain in San Antonio before travelling to Houston, which is around 200 miles (320km) to the east.

An unnamed US official, speaking on condition of anonymity, said that Griner was expected to receive treatment at the Brooke Army Medical Center in San Antonio.

It is thought she will join the Department of Defense programme known as Pisa (Post Isolation Support Activities), which is reportedly designed to help former detainees adapt back to normal life.

On Thursday, state department spokesman Ned Price said the government would speak to Griner about what she needs.

“She may seek the assistance that the US is going to provide, and we are going to make all of that available to her,” he told MSNBC.

Several Republicans criticised the White House for agreeing to the deal.

“What a ‘stupid’ and unpatriotic embarrassment for the USA!!!” former President Donald Trump wrote on his Truth Social website.

“This is a gift to Vladimir Putin, and it endangers American lives.”

And Republican Congressman Adam Kinzinger – a high profile critic of Mr Trump’s – wrote on Twitter that the Biden administration had shown “weakness” by agreeing to release Bout.

The swap involved two private planes bringing Bout and Griner to Abu Dhabi airport from Moscow and Washington, before flying them home.

When negotiations began to secure Griner’s release during the summer, the US said it had made clear it wanted ex-Marine Paul Whelan to be included in an exchange.

But Whelan, jailed in 2018 on suspicion of spying, was not included in the Russian swap, dashing his family’s hopes.

In a phone call from the penal colony where he is being held, Whelan told CNN he was “greatly disappointed” more had not been done to free him, as he said he had carried out no crime.

“I don’t understand why I’m still sitting here,” he said. “I was led to believe that things were moving in the right direction, and that the governments were negotiating and that something would happen fairly soon.”

Republican leader Kevin McCarthy, who is expected to become the next Speaker of the House of Representatives wrote on Twitter that failing to secure Mr Whelan’s release as part of the deal was “unconscionable”.

Viktor Bout sold arms to warlords and rogue governments, becoming one of the world’s most wanted men. His exploits inspired the 2005 Hollywood film Lord of War.

His secretive career was brought to an end by an elaborate US sting in 2008, when he was arrested at a hotel in the Thai capital Bangkok, to the anger of the Russian government.

He was extradited two years later and has spent the past 12 years in an American jail for conspiring to support terrorists and kill Americans.

Footage released by Russian state media showed him disembarking from his flight carrying a bouquet of flowers before embracing his mother and his wife.

Speaking after her husband’s return home, Bout’s wife Alla told the state news agency Tass that her husband was well-fed and “treated very nobly” during the prisoner swap.

“He was not shackled, not handcuffed, he was treated very generously,” she said.

DISCLAIMER: The Views, Comments, Opinions, Contributions and Statements made by Readers and Contributors on this platform do not necessarily represent the views or policy of Multimedia Group Limited.
Tags:
Brittney Griner
Prisoner Swap
Russia
US