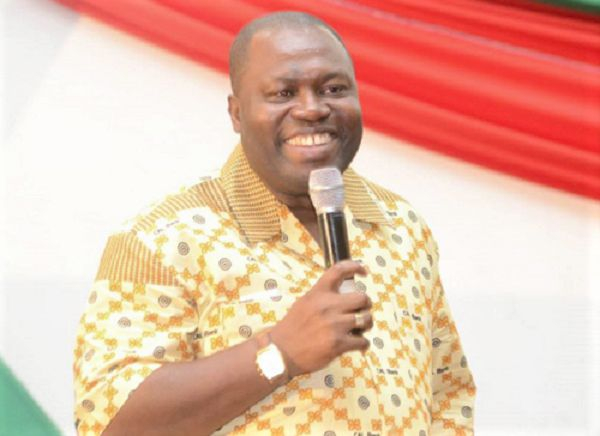 CalBank has announced the appointment of Philip Owiredu as the Chief Executive Officer (CEO) of the Bank effective 1st January 2020.

The appointment of the new CEO was approved by the Bank of Ghana in December 2019.

Mr. Owiredu has been an outstanding leader during his tenure as the Bank’s Executive Director/Chief Financial Officer (CFO) since 2011.

He comes to this position with a broad wealth of experience in banking spanning over fifteen years at CalBank, spearheading the key operational aspects of the Bank notably, the digital innovation agenda and leading high-performing teams.

Philip has played a key leadership role in driving the expansion of the Bank’s business footprint over the past ten years and has been an instrumental player in the Bank’s growth. With full responsibility for the leadership of CalBank, Philip will continue to drive the Bank’s strong performance and deliver on its strategic objectives.

Commenting on his new role, Philip said: “I’m delighted at the confidence vested in me by the Board of Directors with my appointment as Chief Executive Officer. CalBank is a leading indigenoius Bank with a long track record of solid financial performance. I look forward to working with the Board, the management team and exceptional staff to spearhead the Bank through another decade of growth and deliver real value to all stakeholders in the coming years”.

Philip has earned a reputation for his dedication to focused strategy execution, excellent people engagement and strong team-leadership.

He joined CalBank in 2004 as Financial Controller. Prior to joining the Bank, he was a Senior Manager at KPMG Ghana, a leading firm of chartered accountants, management consultants and tax advisers. He is a fellow member of the Association of Chartered Certified Accountants (FCCA).

Chairman of the Board, Paarock VanPercy said: “The Board of CalBank is delighted to have appointed Mr. Philip Owiredu as CalBank’s new Chief Executive Officer after a thorough and rigorous selection process from a number of strong internal and external candidates. Philip possesses the requisite qualities of demonstrated operational leadership, intimate knowledge of CalBank operations and culture as well as possessing the strategic capability to lead the business into the next decade. He has demonstrated clear commitment to the Bank’s strategic purpose and corporate responsibility”.

All four directors have been approved by Bank of Ghana. The new directors were appointed following the mandatory retirement of Malcolmn Pryor and Dr. Kobina Quansah on 31st December 2019.

The newly appointed Non-Executive Directors are profiled below;

He directs business critical projects and instigates change, creates a culture based on performance, efficiency and engagement.

He worked as the Head of International Banking at the then Trust Bank Ghana and also worked with Agricultural Development Bank, Ghana for fifteen years. He holds a Master’s degree in Banking and Finance and a Bachelor’s Degree in Business Administration.

Richard Arkutu is a finance professional. He worked with the International Finance Corporation (IFC), World Bank Group for fourteen years in Infrastructure Development. Prior to this, he was the Vice President of Citibank Nigeria, responsible for sub-Saharan Africa Corporate Finance and Investment Banking Department.

He also worked as the Manager/ Treasurer for Citibank South & East Africa Corporate Finance Department in Nairobi, Kenya and as a senior Financial Analyst for Ashanti Goldfields Company Limited in their Corporate Finance / Treasury department.

He has a Master’s degree from McGill University, Montreal, Quebec, Canada as well as a first degree in Business Economics from Vesalius College, Vrije Universiteit, Brussels, Belgium.

Ben Gustave Barth is a seasoned, multidisciplinary finance and consulting executive with eighteen years proven track record in analyzing and assessing risk of investment portfolios and in structuring transactions. He is currently the Managing Director for Axcero Advisors.

Prior to this, he was a senior partner with The Highland Group, Accra, and Lagos. He also served as the COO and VP Finance with Chester Engineers Africa Inc., Accra, Lagos, and Pittsburgh (USA) and was the Director of Business Development at Jonah Capital Limited. He previously worked with Stanbic Bank Ghana Limited as the regional Operations Head, Ecobank Ghana and Citibank N.A, New York, USA.

Mr. Barth has a Master’s degree from Harvard Business School, Boston, MA, USA and a first degree in Business Administration from the University of Ghana, Legon.

Solomon Asamoah is an investment professional with 25 years of experience in both developed and developing markets.

In 2017, he was appointed the CEO of the Ghana Infrastructure Investment (GIIF) fund, a sovereign investment vehicle.

Solomon was an advisor to Federal Government of Nigeria on the implementation of their infrastructure program.

He has also served as the Vice President of Infrastructure, Private Sector and Regional Integration at the African Development Bank (AFDB), the Vice President for Private Sector and International Investment at the Development Bank of Southern Africa (DBSA) based in Johannesburg and a principal Investment officer at the International Finance Corporation (IFC) Johannesburg.

Mr. Asamoah started his career as an investment banker with HSBC Markets, London. He has personally led over $4 billion in transactions across the African continent.

He has a Master’s degree in Chemical Engineering from Imperial College University of London, UK.

DISCLAIMER: The Views, Comments, Opinions, Contributions and Statements made by Readers and Contributors on this platform do not necessarily represent the views or policy of Multimedia Group Limited.
Tags:
CalBank
Philip Owiredu