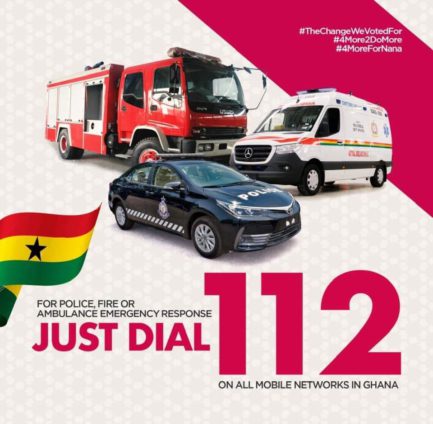 The Tema Regional Police Crime Officer, Superintendent Kwabena Otuo Acheampong has advised the public to desist from calling the private phone numbers of Police officers in times of crisis.

He said during such crises situations the best option was to call the Police Service Emergency numbers for quick response.

He noted that the police service emergency phone numbers work at every point in time and officers are always on duty to attend to the needs of the public.

“Memorize or save Police Emergency Numbers: Call the Police and stop calling police officers’ numbers in case of emergencies or attacks,” Supt Acheampong said at the seventh GNA Stakeholder Engagement and Seminar.

The event provides an interactive platform for state and non-state actors to engage journalists and address national issues.

Supt Otuo Acheampong, who spoke on the “Role of the citizenry towards crime prevention,” encouraged residents to store Police Emergency Numbers, describing them as “civilians’ first line of defence to fight crime.”

“Even if you call the general emergency numbers such as the 111,18555, and others, your call will still be picked and referred but for a quick response know your area police emergency number, it will help our response time.”

Supt. Otuo Acheampong urged the public to commit into memory the advertised police emergency numbers in the police jurisdictions where they live and called for assistance whenever they were in distress.

“Calling the police direct emergency numbers for your community reduces police response time and has the tendency to prevent or mitigate the impact of crime and disorder,” the Tema Regional Crime Officer stated.

He asked the citizens to prioritize personal security and give meaning to the historic, saying that security is a shared responsibility between the public and the police.”

Supt. Otuo Acheampong urged citizens to show greater interest in crime trends in their communities so that together with the police, a safe, secure and peaceful community will be guaranteed.

“Residents must communicate and interact among themselves more often and inform the police quickly on any suspicion in a neighbour’s residence.

“House owners must share their numbers among themselves and hold local police accountable for their safety and security,” he said.

Supt. Otuo Acheampong said the work of the police was a shared responsibility and called on the public to collaborate with the police to fight crime in their area.

“The public could provide the police with the relevant information on the activities of criminals in their area,” saying “unreported and undisclosed incidents do not help in crime statistics.”

The Tema Regional Manager of the Ghana News Agency, Mr Francis Ameyibor, reminded organizations and government that the media played a vital role in creating, galvanizing and reflecting public opinion.

He said the government and organizations could use media more effectively as a medium for social change. The media, therefore, is a powerful tool that must be used strategically towards national development.

Mr Ameyibor said the stakeholder engagement was held every month to serve as a progressive platform for both state and non-state to discuss national issues.